Caroline County is a United States county located on the Eastern part of the Commonwealth of Virginia. The Northern boundary of the county borders on the Rappahannock River, notably at the historic town of Port Royal. The Caroline county seat is Bowling Green.

Caroline County was established in 1728 and was named in honor of Caroline of Ansbach, wife of the then reigning King, George II of Great Britain. It is the birthplace of the renowned racehorse Secretariat, winner of the 1973 Kentucky Derby, Preakness Stakes and Belmont Stakes; the Triple Crown.

As of the 2010 census, the county population was 28,545, having more than doubled in the last fifty years. Caroline is part of the Greater Richmond Region. 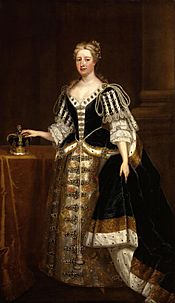 Portrait of Caroline of Ansbach, for whom the county was named

Caroline County was established in the British Colony of Virginia in 1727 from Essex, King and Queen, and King William counties. It was named for Caroline of Ansbach, the wife of King George II of Great Britain, who had recently taken the British throne at the time.

During the Colonial Period, Caroline County was the birthplace of Thoroughbred horse racing in North America. Arabian horses were imported from England to provide the basis for American breeding stock.

Patriot Edmund Pendleton played a large role in the Virginia Resolution for Independence (1775). Caroline native John Penn was a signer of the Declaration of Independence, albeit as a delegate from North Carolina.

Explorers William Clark and his slave York were members of the Lewis and Clark Expedition (1803–1805), and William's older brother, General George Rogers Clark—conqueror of the old Northwest Territory and Revolutionary War hero. Both were born near what is now Ladysmith.

In 1847, after being a member of the first graduating class of Virginia Military Institute (VMI), William "Little Billy" Mahone (1826–1895) of Southampton County began teaching at Rappahannock Academy in Caroline County. He was to become prominent as a railroad builder and developer, Confederate General, leader of Virginia's short-lived Readjuster Party, and a United States Senator.

On May 10, 1863, Confederate Lieutenant General Thomas "Stonewall" Jackson died of complications from pneumonia at the Chandler plantation in Guinea Station (also known as Guiney's Station), in the unincorporated Caroline County community of Woodford. The Chandler residence is now known as the "Jackson Shrine."

During Union General Ulysses S. Grant's Overland Campaign, Confederate troops under General George E. Pickett fought Union troops near Milford. Just as the Civil War was concluding in April 1865, President Lincoln was assassinated in Washington, DC as part of a conspiracy to kill the leaders of the United States. As the conspirators fled, a manhunt was launched. After 10 days, in the wee hours of April 26, federal troops tracked down John Wilkes Booth, Lincoln's assassin, and fellow conspirator David E. Herold at Garrett's farm about 3 miles west of Port Royal. Booth was fatally shot during their capture by federal troops. Herold was returned to Washington, where he was executed by hanging with 3 co-conspirators on July 7, 1865.

At the southern edge of the county, The Meadow, a farm originally established in 1810, became a premier facility for breeding, raising and training Thoroughbred race horses. In 1972, Riva Ridge, raised at The Meadow, won the Kentucky Derby and the Belmont Stakes, two of the three events of the Triple Crown. The following year, Secretariat, born at The Meadow, won the famous Triple Crown for the Chenery family's Meadow Stable.

In 2003, The State Fair of Virginia purchased Meadow Farm for development as a new site for the annual Virginia State Fair. Long held at locations in the capital of Richmond and Henrico County, the fair was increasingly squeezed out by expanding development around it and the growth of the event. Most recently, it was held at Strawberry Hill in central Henrico County, at the facility which became the Richmond International Raceway. Beginning in September 2009, the annual Virginia State Fair has been held at the new Meadow Event Park in Caroline County. The annual Meadow Celtic Games and Festival (formerly Richmond Celtic Games and Festival) will also be held at the new facility.

In 2009 the National Civic League presented Caroline County with one of ten annual All-America City Awards.

Caroline County is bounded on the north by Stafford and King George counties; on the south by Hanover County; on the east by King William, King and Queen, and Essex counties; and on the west by Spotsylvania County.

The county is also home to a quarry that has proved a rich source of pre-historic whale and shark skeletons. The whole county is located in what was in ancient times an ocean. It is known to palaentologists as the middle Miocene Calvert Formation of Virginia. A whale skeleton discovered there in 1990 was proved to be a new whale species (see Eobalaenoptera harrisoni).

Caroline County is served by Interstate 95, US 1 and US 301. These three routes are important for interregional travel.

Economic growth in Caroline in the last ten years have been rapid, mostly due to affordable housing and an aggressive industrial recruitment program. In 2005, Caroline was recognized as the 10th Fastest Growing County in America. Caroline won the CEDA award again in 2009 for business recruitment.

Among recent Economic Development successes in Caroline have been the recruitment of the State Fair of Virginia(previously in Richmond since 1854 when the first State Fair opened in Monroe Park), Remuda Programs for Eating Disorders, The Virginia Sports Complex, the multi-national electrical contracting firm, M.C. Dean, and the Fortune 14 Company McKesson Corporation. The McKesson Corporation recruitment of a 340,000 distribution center was the largest private square footage investment in Virginia in 2010.

There are two incorporated towns in Caroline County. They are:

The town of Bowling Green was earlier known as New Hope Village. One of the earliest stage roads in the colony ran through the area from Richmond to the Potomac River, where a ferry crossing was operated to Charles County, Maryland. One of the first stage lines in America to maintain a regular schedule operated along this road. New Hope Tavern was built along the road prior to 1700, and the area around it became known as New Hope Village.

The manor home of the Hoomes family, built on plantation land patented by Major Thomas Hoomes in 1667, was constructed in 1741. A prominent town landmark, it is one of the oldest residences in original condition in Virginia. Bowling Green Farm is now on the Virginia Landmarks Register and the National Register of Historic Places.

The present Caroline County Court House was built in 1835, and Bowling Green was incorporated as a town in 1837. The town is best known as the "cradle of American horse racing". It also is the site of the second oldest Masonic Lodge in the nation.

The Richmond, Fredericksburg and Potomac Railroad (chartered in 1834) was built through nearby Milford (just west of town) and reached Fredericksburg by 1837. This important rail link between several major northern railroads at Washington, D.C. and other major southern railroads at Richmond was partially owned by the Commonwealth of Virginia for years. It was purchased by CSX Transportation in the 1990s. A major freight railroad line for north-south traffic, the corridor also carries many Amtrak trains. Although the closest Virginia Railway Express (VRE) commuter passenger rail service to Northern Virginia is accessed at Spotsylvania, future VRE extensions southward may include service at Milford. This would increase convenience for Bowling Green and the surrounding area.

Bowling Green is located along Virginia State Route 2, one of the two earlier highways between Richmond and Fredericksburg. In later years, U.S. Route 301 was built through the area, connecting Richmond with Baltimore, Maryland by what was effectively an eastern bypass of the Washington, D.C. area. A new road, Virginia State Route 207, was established from Bowling Green west to Carmel Church. It intersects Interstate 95 and U.S. Route 1, major north-south highways.

In 1941, the United States government acquired 77,000 acres (310 km2) of Caroline County to the north and east of Bowling Green. It established the A.P. Hill Military Reservation. Known in modern times as Fort A.P. Hill, the facility was named for Virginia military hero of the United States Army and later Confederate General Ambrose Powell Hill. Thousands of regular military and reserve troops undergo training at the complex each year. It was also the site of national Jamboree gatherings of the Boy Scouts of America for 29 years between 1981 and 2010.

Port Royal is one of the area's more historic towns. It was first established in 1652 as a port on a navigable portion of the Rappahannock River during an era when waterways were the major method of transportation of people and property in the British Colony of Virginia. It was an important point for export of tobacco, Virginia's cash crop.

Local tradition holds that Port Royal was named after the Roy family. Dorothy Roy and her husband John owned a warehouse chartered by the crown, a ferry service across the Rappahannock River to King George County and a tavern. In the 21st century, the chimneys of the Roy house are preserved landmarks in the town.

Port Royal was incorporated as a town in 1744. The "town green", upon which stands today the Town Hall and the firehouse, was forever reserved "for public and civic use".

Shipping of property from the port began to decline after completion of railroads which began in Virginia in the 1830s. The last scheduled passenger ship service ended in 1932, supplanted by highways. However, Port Royal was served by the new highways which became U.S. Route 17 and U.S. Route 301, with their crossroads at Port Royal.

There are two unincorporated census-designated places in Caroline County:

All content from Kiddle encyclopedia articles (including the article images and facts) can be freely used under Attribution-ShareAlike license, unless stated otherwise. Cite this article:
Caroline County, Virginia Facts for Kids. Kiddle Encyclopedia.