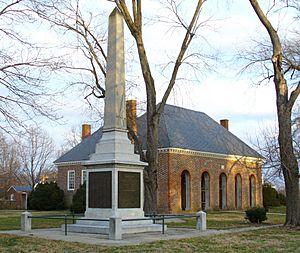 Hanover County is located in the Commonwealth of Virginia. As of the 2010 census, the population was 99,863. Its county seat is Hanover Courthouse.

Hanover County is included in the Greater Richmond Region.

Located in the Piedmont of Virginia, Hanover County was created on November 26, 1719, from the area of New Kent County called St. Paul's Parish. It was named for the Electorate of Hanover in Germany, because King George I of Great Britain was Elector of Hanover at the time. The county was developed by planters moving west from the Virginia tidewater, where soils had been exhausted by tobacco monoculture.

Hanover County was the birthplace and home of noted American statesman Patrick Henry. He reportedly married Sarah Shelton in the parlor of her family's house, Rural Plains, also known as Shelton House. At the Hanover Courthouse, Henry argued the case of the Parson's Cause in 1763, attacking the British Crown's attempt to set the salaries of clergy in the colony regardless of conditions in the local economy. The historic Hanover Courthouse is pictured in the county seal. Hanover County was also the birthplace of Henry Clay, who became known as a politician in Kentucky, author of the Missouri Compromise of 1820, and Secretary of State.

At one point, Hanover County is only 5 miles (8.0 km) from the current city limits of Richmond. The Chickahominy River forms the border of the county in the Mechanicsville area. During the American Civil War and the 1862 Peninsula Campaign, the Union Army approached the river and could hear the bells of Richmond's churches. But they learned that the river was a major obstacle. Union General George B. McClellan failed in his attempt to get all his troops across it, intending to overwhelm the outnumbered Confederate forces defending Richmond. His failure to take Richmond, the Confederate capital, has been said to have prolonged the war by almost 3 years. Hanover County was the site of a number of Civil War battles, including the Seven Days Battles of the Peninsula Campaign and Battle of Cold Harbor in 1864.

The incorporated town of Ashland is located within Hanover County. Ashland is the second and current home of Randolph-Macon College.

Kings Dominion amusement park opened in 1975 in Doswell and added to the county's economy. In January 2007, America's Promise named Hanover County as one of the top 100 communities for youth.

All content from Kiddle encyclopedia articles (including the article images and facts) can be freely used under Attribution-ShareAlike license, unless stated otherwise. Cite this article:
Hanover County, Virginia Facts for Kids. Kiddle Encyclopedia.