Kings Dominion is an amusement park located in Doswell, Virginia, 20 miles (30 km) north of Richmond and 75 miles (120 km) south of Washington, D.C.. Owned and operated by Cedar Fair, the 400-acre (1.6 km2) park opened to the public on May 3, 1975, and features over 60 rides, shows and attractions including 12 roller coasters and a 20-acre (81,000 m2) water park. Its name is derived from the name of its sister park, Kings Island, and the nickname for the state of Virginia, "Old Dominion." 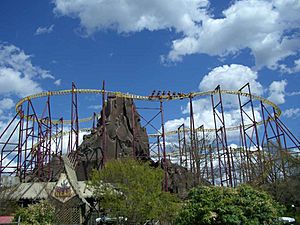 Following the success of Kings Island in Mason, Ohio, northeast of Cincinnati, Family Leisure Centers decided to expand into a new region of the country by opening a second park. A 400-acre (1.6 km2) site was chosen in Doswell, Virginia, north of Richmond in the heart of the Mid-Atlantic, and construction began on October 1, 1972. The new park was designed with Kings Island in mind as the blueprint using similar themes, rides, and activities. Kings Dominion officially opened on May 3, 1975, offering fifteen attractions. Daily admission price in 1975 was $7.50, and a dollar for parking. A campground was completed in time for the 1978 season. 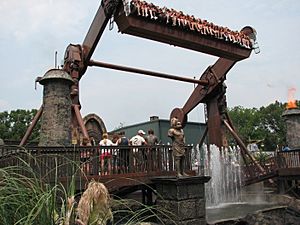 The Crypt at Kings Dominion

On May 22, 2006, Cedar Fair Entertainment Co. announced that they were purchasing all five Paramount Parks. The sale was finalized on June 30, 2006 for $1.24 billion. The park continued to operate as Paramount's Kings Dominion until the beginning of the 2007 season when Paramount was dropped from the title.

Along with International Street, Old Virginia is the only original section of Kings Dominion that has kept its same name throughout the park's history. This area has a distinct old-fashioned country theme with colonial-themed props (including a replica of the Liberty Bell), music, and architecture. In the 1970s, Old Virginia had an Intamin Flying Dutchman flat ride called Jamestown Landing; behind it, Old Virginia had a steam train ride, Old Dominion Line, which ran through the woods in the back of the park. Jamestown Landing closed by 1980; the Old Dominion Line stayed until it closed in the 1990s.

Candy Apple Grove was known as Coney Island when the park first opened in 1975. It was renamed Candy Apple Grove in 1976. The area is Kings Dominion's largest section in the park, and in its early years, it featured an orchard theme that included three apple-themed rides: Apple Turnover, Bad Apple, and Adam's Apple. Much of the apple-related themes were removed over the years, and the area became known as simply The Grove when it merged with the former Wayne's World area in 2001.

As part of Kings Dominion's 40th-anniversary celebration in 2014, The Grove was restored to its original orchard theme, and the name was changed back to Candy Apple Grove. The animatronic Singing Mushrooms, popular decades ago, was redeveloped with newer technology and placed back on display. Other features that made a return to the area include a fully restored floral clock near the Carousel, oversized candy apples, and the popular blue ice cream that existed in the park for decades. The westernmost corner of Candy Apple Grove, distinct from the rest of the area, is themed to the 1950s.

Some of the area's more notable rides include WindSeeker, a 301-foot-tall (92 m) swing ride that opened in 2012, and Delirium, a type of pendulum amusement ride that opened in place of stand-up roller coaster Shockwave in 2016. Candy Apple Grove's newest ride, steel coaster Twisted Timbers, opened in 2018 replacing Hurler and reusing some of the previous support structure. In addition to rides, the area features an arcade, carnival games, fast-food restaurants, and a gift shop.

Safari Village (formerly named Congo) is Kings Dominion's easternmost and predominantly African-themed section. It was inspired by one of the park's original attractions, the Lion Country Safari. Containing a boat ride and a monorail train through a nature preserve, the safari attraction closed in the 1990s. The area is home to mostly African architecture and landscaping, with many rides and restaurants themed to African stories and geography.

Soak City, formerly known as WaterWorks, is Kings Dominion's water park. It opened in 1992 as Hurricane Reef and is included with admission to Kings Dominion. In 2015, the water park was expanded and re-branded as Soak City.

Fast Lane is Kings Dominion's virtual queue system. For $60, visitors get a wrist band that enables them to get to the front of the line on 15 of the most popular attractions without queueing.

All content from Kiddle encyclopedia articles (including the article images and facts) can be freely used under Attribution-ShareAlike license, unless stated otherwise. Cite this article:
Kings Dominion Facts for Kids. Kiddle Encyclopedia.