Carowinds is a 407-acre (165 ha) amusement park, located adjacent to Interstate 77 in Charlotte, North Carolina. Although it has an official North Carolina address, the park is located along the North Carolina-South Carolina state line, with a portion of the park also located in Fort Mill, South Carolina. The park opened on March 31, 1973, at a cost of $70 million. This was the result of a four-year planning period spearheaded by Charlotte businessman Earl Patterson Hall, who was inspired to build the park by a 1956 trip to Disneyland and a dream of bringing the two states closer together. Owned and operated by Cedar Fair, Carowinds also features a 27-acre (110,000 m2) water park, Carolina Harbor, which is included with park admission. The park has a Halloween event called SCarowinds and a winter event called WinterFest.

Carowinds was announced on October 10, 1969, and originally planned to consist of a large resort which would a theme park, hotels, a shopping center, a golf course, and an NFL stadium. The name "Carowinds" was obtained from the park's original theme of the history and culture of the Carolinas, and is a portmanteau of "Carolina" and "winds", in reference to the winds that blow across the two states. Ground was broken on May 1, 1970 with a planned opening date in April of 1972. After numerous construction delays due to weather, the park eventually opened on March 31, 1973. The first season brought in over 1.2 million visitors, however, attendance at Carowinds was curtailed by the 1973 oil crisis, and plans for the proposed resort were put on hold. Hall and the other stockholders of the Carowinds Corporation continued to operate the theme park through 1974, though sagging attendance and mounting debt forced the company to sell to Taft Broadcasting in early 1975.

Ownership had transferred from Family Leisure Centers – a joint venture between Taft and Top Value Enterprises) – to Kings Entertainment Company, which in turn was acquired by Paramount. Taft Broadcasting brought new life to the park with their Hanna-Barbera characters, coupled with the inclusion of several rides aimed to appeal to younger guests. Carowinds added its second roller coaster, and first wooden coaster, with the addition of Scooby-Doo in 1975.

In 1976, Carowinds opened Thunder Road, a Philadelphia Toboggan Coasters racing wooden coaster, designed by Curtis D. Summers. It was Carowinds’ largest and most expensive ride built in the park’s short three years of existence, at a cost of $1.6 million. White Lightnin', a Schwarzkopf launched shuttle roller coaster, opened in 1976. Throughout the remainder of the late 70s and 80s, multiple flat rides were added to the park. 1980 saw the addition of Carolina Cyclone, the first roller coaster in the world to feature 4 inversions. In 1992, Kings Entertainment Company was acquired by Paramount Communications.

In 1993, the word "Paramount" was added to the park's name, becoming Paramount's Carowinds. Now under the ownership from Paramount, many rides were based on films from Paramount Pictures, including Action Theater (1993), Drop Zone: Stunt Tower (1996), and Top Gun: The Jet Coaster (1999). The addition of Top Gun: The Jet Coaster became the single largest investment in the park's history, at a price of $10.5 million. After the success of Flying Ace Aerial Chase at sister park Kings Island, Paramount decided to build a clone at Carowinds, and opened in 2003 in the park's children's area. The following year, Nighthawk (then known as Stealth) was relocated from California's Great America and opened as BORG Assimilator in the location previously home to Smurf Island.

On January 27, 2006, the Dayton Daily News reported that CBS Corporation (which split from Viacom at the end of 2005) would be selling Paramount's Carowinds and other parks in its Paramount Parks division. On June 30, 2006, Cedar Fair Entertainment Company acquired Paramount Parks, including Carowinds.

Although Cedar Fair continued to use the Paramount's Carowinds name through the remainder of the 2006 season, it began to phase out the Paramount name in press releases, the park website, and on signage within the park. In January 2007, a new logo featuring the Cedar Fair icon but lacking the "Paramount" name, was revealed on the park website. The new logo featured the trademark Cedar Fair flags, flying on the letter "I" on the Carowinds name. The other four Paramount-branded parks that Cedar Fair acquired all received similar changes. The "Paramount" name was dropped from all of the parks after the 2006 season. 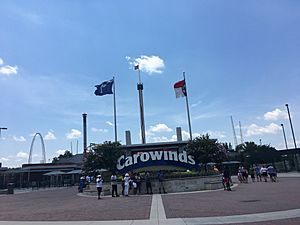 On August 26, 2013, Cedar Fair announced a $50-million investment plan to expand Carowinds over three years starting in 2014. The expansion includes a $30-million roller coaster, a $2.5-million water slide, a $7-million food complex, and $4 million to improve the park's ticket booths and front areas.

On August 21, 2014, Carowinds announced the addition of Fury 325 for the 2015 season. Designed by Bolliger & Mabillard, the ride is the fifth-tallest roller coaster in the world, after its debut in the spring of 2015 as another component of the park's previously announced "top-to-bottom" expansion program. A new front entrance, replacing the original North Gate entrance of the park, also opened along with Fury 325 for the 2015 season.

On August 27, 2015, Carowinds announced that the water park, formerly known as Boomerang Bay, would be expanded and renamed Carolina Harbor in 2016. The Australian theme would be removed and replaced with a Carolina harbor theme. The expansion includes a new six-slide complex, a new wave pool, and several new splash areas for kids.

For the 2018 season, the park's children's area known as Planet Snoopy, was expanded and converted to Camp Snoopy with the addition of six new children's attractions.

In 2019, Carowinds announced Boogie Board Racer, the longest mat racing slide in the Southeast would open in Carolina Harbor in 2020. The retirement of the Rip Roarin' Rapids ride was also announced, along with the closure of the Dinosaurs Alive! attraction.

Carowinds did not open for the 2020 season because of the COVID-19 pandemic in the United States, although it is expected to reopen for the 2021 season. On October 28, 2020, Carowinds announced it would re-open from November 21 through December 20 for Taste of the Seasons, a holiday event featuring food, shows, rides and more. 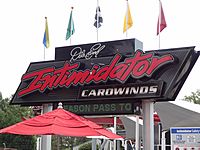 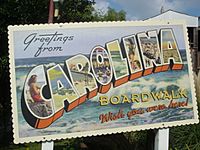 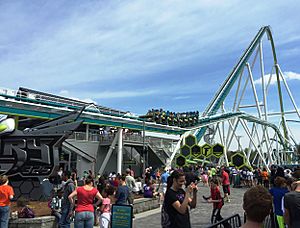 Included in the price of admission to Carowinds is access the 27-acre Carolina Harbor water park. Based on a Coastal Carolina theme, it features 15 rides and attractions. Originally opened as Ocean Island in 1982, the water park has also been known as Riptide Reef (1989–1997) WaterWorks (1997–2006), and Boomerang Bay (2007–2015). On August 27, 2015, Carowinds announced an expansion for the area that added five additional attractions and resulted in the name changing to Carolina Harbor.

Carowinds re-introduced WinterFest for the 2017 season. This seasonal holiday event features the park decorated for the Christmas season, a tree lighting, Christmas carolers, homemade crafts, a parade, and select rides. The park previously had Winterfest in 2005 when owned by Paramount.

In September 2000 the park introduced SCarowinds an annual Halloween attraction, SCarowinds is presented on select nights in September and October, as well as the first weekend in November. The park is open with The Great Pumpkin Fest starring Snoopy and rest of the Peanuts gang throughout. The Great Pumpkin Fest ends at 5:30 pm, and reopens as SCarowinds at 7 pm with the powerful sorcerer demon of SCarowinds himself The Overlord. The experience includes numerous haunted attractions and incorporates most of the existing park rides into a nightmarish experience. The SCarowinds Halloween Haunt is recommended for ages 13 and up, but any age is permitted for admission.

The Paladium is an outdoor amphitheater located at Carowinds. It opened in 1975 and was the Charlotte area's premier outdoor concert venue until the opening of Blockbuster Pavilion, now PNC Music Pavilion, in 1991. It lost most of its major acts to the Uptown Amphitheatre at the NC Music Factory (now the Charlotte Metro Credit Union Amphitheatre at AvidxChange Music Factory) when it opened in 2009, and now hosts mostly Christian bands. Admission to the Paladium is separate from admission to Carowinds.

Fast Lane is a limited-access line queue system offered for an additional charge at Cedar Fair amusement parks. Visitors can purchase access, which includes a wristband that allows them to bypass standard lines in favor of shorter ones at many of the parks' most popular attractions. Fast Lane Plus is a more expensive, higher-end version that includes several additional attractions.

The annual Carowinds Festival of Music allows music students to play in public performances and receive comments and ratings from nationally recognized adjudicators. Bands, choirs, show choirs, and orchestras can all play for ratings. Plaques and ribbons are awarded for performances which receive ratings of superior and excellent. 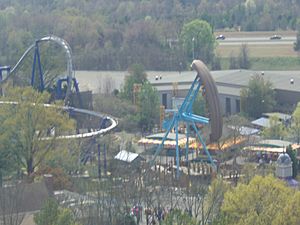 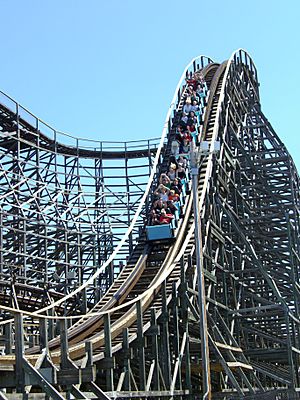 All content from Kiddle encyclopedia articles (including the article images and facts) can be freely used under Attribution-ShareAlike license, unless stated otherwise. Cite this article:
Carowinds Facts for Kids. Kiddle Encyclopedia.