Intimidator 305 is a steel roller coaster located at Kings Dominion in Doswell, Virginia, United States. Manufactured by Intamin, Intimidator 305 opened to the public on April 2, 2010, as the park's fourteenth roller coaster. It is located in the Safari Village section of the park near Anaconda on the former site of the Safari Monorail ride. Standing at 305 feet (93 m) tall and reaching speeds up to 90 mph (145 km/h), it is the second Giga Coaster to be built in North America, following Millennium Force at Cedar Point. The $25-million investment was the largest of any ride in park history. Themed to racing, the coaster is named after the late NASCAR driver Dale Earnhardt, who was commonly known as "The Intimidator".

Intimidator 305 has a first drop of 300 feet (91 m), which reaches a maximum descent angle of 85 degrees. Its unique lift hill structure only utilizes two main points of support at the hill's crest. Its overall height is also higher than the observation platform of the park's tallest structure, the Eiffel Tower attraction. After only one season of operation, the ride underwent major reconstruction of its first turn to reduce the number of greyouts and blackouts some riders were experiencing on the ride.

Intimidator 305, the first Giga Coaster built since Steel Dragon 2000 in 2000, was announced on Thursday, August 20, 2009. Local news media, then Cedar Fair CEO Dick Kinzel and Dale Earnhardt Incorporated CEO Jeff Steiner, and Dale Earnhardt's daughter Taylor Earnhardt were in attendance to the announcement. The official announcement, led by Kings Dominion Head Manager Ed Kuhlmann, was accompanied by animation videos of the ride and a working model. The roller coaster is themed to Earnhardt, a NASCAR racing legend.

Intimidator 305 sits on the former land occupied by the Safari Monorail which closed in 1993. It is also located right next to Flight of Fear. Kings Dominion broke ground on Intimidator 305 on June 1, 2009. The first pieces of track arrived a few days later. On August 19, the first pieces of steel were put into place. The 305-foot (93 m) lift hill was topped off in November 2009. Construction crews continued to construct the ride throughout the winter and the last piece of track was lifted into place on January 9, 2010. Intimidator 305's first test run was on Sunday, March 14, 2010.

Some riders experienced problems immediately following the first drop due to overwhelming G-forces produced in the ride's original design. Riders reported symptoms of greying or blacking out, a brief loss of vision or consciousness depending on severity. To lower the number of occurrences, Kings Dominion reduced the coaster's maximum speed by temporarily installing trim brakes on the first drop. During the following off-season, the coaster's first turn was redesigned, resulting in a wider turn radius and fewer G-forces. The major modification allowed them to remove the trim brakes on the first drop, returning the ride to its original maximum speed of 90 mph (145 km/h). 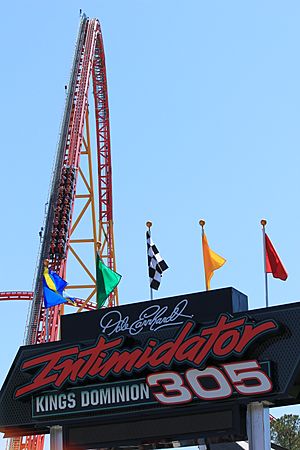 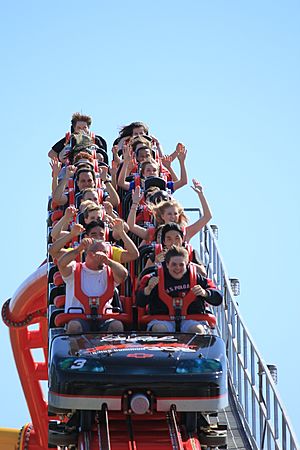 The silver train in the brake run, with the old restraints

Intimidator 305 has been described as a mix of Millennium Force and Maverick, both located at Cedar Point. Intamin designed the ride to feature the high lift hill like Millennium Force. Following the lift hill are low-to-the-ground tight turns and hills, similar to Maverick. The ride features six air time humps and three near-ground-level high-speed turns over 5,100 feet (1,554 m) of track.

While the train is being loaded in the station, the catch car of the cable lift is latched onto the middle car of the train. Before the train leaves the station, a recording that states, "Gentlemen, start your engines!" is heard followed by a loud revving sound. Once the train is dispatched, the train ascends the 45-degree lift hill at 13.2 miles per hour (21.2 km/h) to a maximum height of 305 feet (93 m). Once the train crests the top of the lift, the train descends down the 300-foot (91 m), 85-degree drop, reaching speeds up to 90 mph (145 km/h). The drop is steep enough and sudden enough that riders towards the back of the train are thrown out of their seats into the restraints, so that during the 300-foot (91 m) near-vertical drop they feel as if they're about to fall out of the ride. The train turns right into a 270-degree turn before ascending the 150-foot (46 m) airtime hill. The train then descends into a high-speed bunny hop before entering another high-speed turn. The train then maneuvers 3 sharp twists before entering the final high-speed turn. The train then climbs another airtime hill with brakes, followed by another airtime hill before entering a final twist and then climbing a small, twisty bunny hop into the magnetic brakes. One cycle of the ride lasts about 3 minutes.

Intimidator 305 features two trains themed as Dale Earnhardt's black number 3 car. The trains feature headlights at the front of each train as well as advertisement stickers that are found on NASCAR cars. One train is red with the other being silver. Each train has eight four-passenger cars, allowing thirty-two passengers per train. The trains are arranged in stadium-style seating with overhead lap bars fitted with soft, padded over-the-shoulder straps. In early July 2010, the ride received a unique new restraint design. The over-the-shoulder part of the harness now resembles a padded seat belt rather than the typical over-the-shoulder restraints used by Intamin.

Intimidator 305 was ranked in the Amusement Today's Golden Ticket Awards for best new ride of 2010 with 21% of the vote, to come in second place.

All content from Kiddle encyclopedia articles (including the article images and facts) can be freely used under Attribution-ShareAlike license, unless stated otherwise. Cite this article:
Intimidator 305 Facts for Kids. Kiddle Encyclopedia.