Maverick is a steel roller coaster located at Cedar Point in Sandusky, Ohio. Manufactured by Intamin at a cost of $21 million, it was the 500th roller coaster designed by German engineer Werner Stengel and the first to feature a twisted horseshoe roll element. There are two launch points along the 4,450-foot (1,360 m) track that utilize linear synchronous motors (LSM). Maverick features a beyond-vertical drop of 95 degrees and reaches a maximum speed of 70 mph (110 km/h).

Maverick was originally scheduled to open on May 12, 2007, but the opening was delayed after testing revealed that its heartline roll element, which followed the second launch, was too intense and placed excessive stress on the trains. It was replaced in favor of an s-curve element that joins two banked turns, and the coaster opened to public on May 26, 2007. The slogan used in the ride's promotion was "The Old West Was Never This Wild."

Maverick sits on the former site of White Water Landing. After White Water Landing closed on October 31, 2005, construction on Maverick began. On January 24, 2006, Cedar Fair Entertainment Company filed a trademark for the name Maverick. The project became known officially and colloquially as "Project 2007" until the announcement on September 7, 2006.

After the closure of the 2005 season in October, the White Water Landing log flume ride was retired. Although the ride was disassembled, the station was left intact and now serves as Maverick's on-ride photo booth and queue. Beginning in February 2006, concrete footers were poured on the former White Water Landing site, as well as in the pond that once housed Cedar Point's Swan Boat ride. In May 2006, track segments arrived in a fenced area near the park's off-site hotel, formerly named Breakers Express renamed Express Hotel. Initially, Cedar Point covered track segments with blue tarps. On July 16, 2006, the first steel supports were erected. On the week of August 16, 2006, the first track segments were installed. On September 11, 2006, the crest of the lift hill was added, thereby topping off the ride. Track installation was completed on October 28, 2006 and the first phase of testing began in January 2007.

On May 8, 2007, four days before Maverick was scheduled to debut, park general manager John Hildebrant announced that the ride would be delayed until early June because three 40-foot (12 m) track sections after the second launch needed to be replaced. These sections made up the heartline roll element and put excessive stress on the trains, which also might have caused discomfort to passengers due to high g-forces. On May 17, 2007, the heartline roll was removed and was replaced with an s-curve. The s-curve transitions the existing track from a banked right curve to a banked left curve. Installation of the s-curve was completed on May 24 and final testing and licensing of the attraction resumed. On the same day, Cedar Point officials also announced that Maverick would debut on May 26. 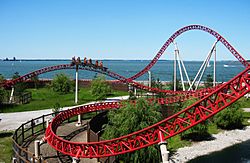 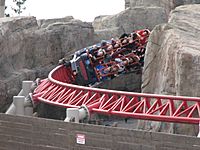 Maverick features six three-car steam-era style trains that seat twelve passengers each. The trains have tiered seating and are named and colored as follows: Brett, Brass, Brent, Iron, Ben, Gunmetal, Beau, Gold, Bart, Silver, and Sam. Copper. The restraint system, similar to Accelerator Coasters, includes a hydraulic over the shoulder harness and an interlocking seat belt. The station features an elevated dual unloading and loading platform enabling two trains to be loaded and unloaded simultaneously. Maverick features western music, contributing to the western theme. There is also an elevator shaft designed to look like a silo, that also contributes to the western theme. The passenger height restriction was initially set to a minimum of 48 inches (120 cm). In May 2007, the height restriction was raised to a minimum of 52 inches (130 cm) per recommendations made by Intamin. At the 2015 Winter Chill Out, Cedar Point announced that the traditional over the shoulder restraints would be replaced with the soft vest style restraints seen on Intimidator 305.

Maverick is negatively affected by unfavorable weather conditions as a high velocity ride. "Rain, and/or lightning" may result in the closing of the ride depending on the severity. It will close under any kind of steady precipitation.

There is no minimum age requirement, but passengers must meet the minimum height requirement of 52 inches and a maximum of 78 inches to ride. Some persons over a certain weight/waist size will not be permitted to ride if the seat and lap bar harness cannot accommodate them. Passengers on Maverick may not bring any loose articles onto the train and will be required to wear shirts and footwear. Headphones must be removed before boarding. Glasses must also be secured by an athletic strap.

Guests are advised not to ride Maverick if they have "a history of recent surgery, heart trouble/high blood pressure, neck trouble, back trouble, or any other condition that may be aggravated by riding, or who are pregnant".

In the 2020 season, following the COVID-19 pandemic, timed boarding passes are currently in effect named "Access Passes" to comply with social distancing guidelines.

All content from Kiddle encyclopedia articles (including the article images and facts) can be freely used under Attribution-ShareAlike license, unless stated otherwise. Cite this article:
Maverick (roller coaster) Facts for Kids. Kiddle Encyclopedia.