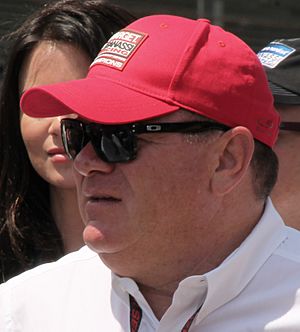 Chip Ganassi Racing with Felix Sabates is an American racing team that is one of the best teams in American racing. They compete in the IndyCar Series, NASCAR, and sportscar racing. Their IndyCar drivers are Ryan Briscoe, Scott Dixon, Tony Kanaan, and Charlie Kimball. Dixon is the current IndyCar champion, which he won for the third time in 2013. Ganassi's NASCAR team's drivers are Jamie McMurray and Kyle Larson. Their sportscar team's drivers are Scott Pruett, Marino Franchitti, and Memo Rojas.

Two of Ganassi's IndyCar cars and one of their NASCAR teams are sponsored by Target. The drivers of the Target sponsored cars are often in Target advertising and posters of them can be seen in many Target stores.

All content from Kiddle encyclopedia articles (including the article images and facts) can be freely used under Attribution-ShareAlike license, unless stated otherwise. Cite this article:
Chip Ganassi Racing Facts for Kids. Kiddle Encyclopedia.