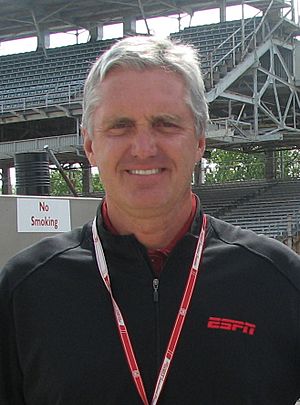 Edward "Eddie" McKay Cheever, Jr. (born January 10, 1958 in Phoenix, Arizona) is an American racing driver. He raced for almost thirty years in Formula One, Sports cars, CART and the Indy Racing League. Cheever participated in 143 World Championship Formula One races and started 132, more than any other American, driving for nine different teams from 1978 through 1989. In 1997, he formed his own IRL team and won the Indianapolis 500 as both owner and driver in 1998. The team now competes in sports cars.

All content from Kiddle encyclopedia articles (including the article images and facts) can be freely used under Attribution-ShareAlike license, unless stated otherwise. Cite this article:
Eddie Cheever Facts for Kids. Kiddle Encyclopedia.