Alain Prost is a French retired automobile racer and Formula One World Champion. He was born February 24, 1955 in Lorette, France. His nickname is "Professor". 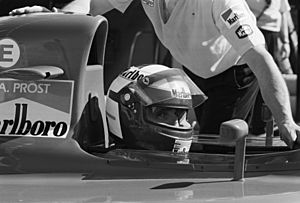 He started driving with McLaren in 1980. From 1981 until 1983, he was racing for Renault F1. Prost returned to McLaren in 1984 and raced for them until 1989. During this time he won his first three championships. Prost left McLaren to race for Scuderia Ferrari in 1990 and 1991. In 1992, Prost took a year off from racing. He returned to racing in 1993 with WilliamsF1. Prost retired from racing after winning his fourth title in that year.

In his career, Prost beat nearly all his team-mates on total points, including five World Champions. Only in 1980 he lost by a point and in 1984 by half a point.

All content from Kiddle encyclopedia articles (including the article images and facts) can be freely used under Attribution-ShareAlike license, unless stated otherwise. Cite this article:
Alain Prost Facts for Kids. Kiddle Encyclopedia.