A V10 engine, often just called a V10, is an internal combustion engine with 10 cylinders. The engine has five cylinders on each side called banks. The two banks form a "V"-shaped angle. All ten pistons turn a common crankshaft. A V10 engine can be powered by different types of fuels, including gasoline, diesel and natural gas. 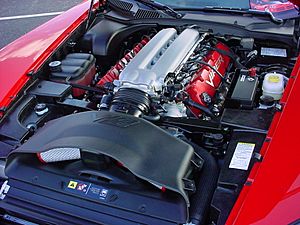 Until recently, V10s had rarely been used for road cars. A V12 runs smoother and is only a little harder to build. A V8 is easier to build and costs less to run. New technology has made the use of V10 engines more practical.

Dodge designed a V10 for use in trucks. The engine was revised and used in the Dodge Viper. Ford developed a heavy-duty V10 engine for use in their trucks.

The largest use of the V10 engines has been in Formula One racing. Alfa Romeo made the first modern Formula One V10 in 1986, but it was never used in a race car. Later the V10 was introduced by Honda and Renault before the 1989 season. After turbochargers were banned, the V10 engine was often used. V10 engines were the only type used from the 1998 season. V10s were banned for the 2006 season and Formula One teams started using V8 engines.

There are other cars with V10 engines in auto racing. The most common is the Judd engine.

All content from Kiddle encyclopedia articles (including the article images and facts) can be freely used under Attribution-ShareAlike license, unless stated otherwise. Cite this article:
V10 engine Facts for Kids. Kiddle Encyclopedia.