Alfa Romeo Automobiles S.p.A. is an Italian car manufacturer created on June 24, 1910 in Milan. Alfa Romeo has been a part of the Fiat Group since 1986, and since February 2007 a part of Fiat Group Automobiles. The company was originally known as A.L.F.A., which stands for Anonima Lombarda Fabbrica Automobili (English: Lombard Automobile Factory, Public Company).

Alfa Romeo has competed successfully in Grand Prix motor racing, Formula One, sportscar racing, touring car racing, and rallies. It has competed both as a constructor and an engine supplier, via works entries (usually under the name Alfa Corse or Autodelta), and private entries.

The first racing car was made in 1913, three years after the foundation of the company, and Alfa Romeo won the inaugural world championship for Grand Prix cars in 1925. The number victories in races until the Second World War, against rivals such as Bentley, and the production of luxury cars compete with Bugatti, have made Alfa Romeo a world motor-sport legend.

The company gained a good name in motorsport, which gave a sporty image to the make of car. Enzo Ferrari founded the Scuderia Ferrari racing team in 1929 as an Alfa Romeo racing team, before becoming independent in 1939. It holds the world's title of the most wins of any car model in the world.

In the 1960s Alfa Romeo became famous for its small cars and models specifically designed for the Italian police and Carabinieri; among them the "Giulia Super" and the 2600 Sprint GT. The colours of the Alfa Romeos used by the Polizia were/are green/blue with white stripes and writing, known as "Pantera" (Panther), enhancing the aggressive look of the Alfa, while the Carabinieri Alfas are dark blue with white roofs and red stripes, known as the "Gazzella" (Gazelle) denoting the speed and agility of these "Pattuglie" (patrol cars). 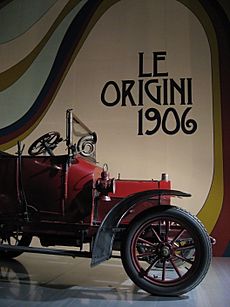 The BBC motoring show Top Gear presenters Jeremy Clarkson, Richard Hammond and James May continuously praised Alfas for their beauty and driving characteristics even though Italian cars had a long-term bad reputation for unreliability. Both Clarkson and May have previously owned Alfas (a GTV6 for Clarkson and an Alfa 164 for May) and both have stated that they regretted selling their Alfas the most.

All content from Kiddle encyclopedia articles (including the article images and facts) can be freely used under Attribution-ShareAlike license, unless stated otherwise. Cite this article:
Alfa Romeo Facts for Kids. Kiddle Encyclopedia.