Jeremy Charles Robert Clarkson (born 11 April 1960) is an English broadcaster, journalist and writer who specialises in motoring. He is best known for co-presenting the BBC TV show Top Gear with Richard Hammond and James May from October 2002 to March 2015. He was ranked 49th on Motor Trend Magazine's Power List for 2011. It lists the fifty most influential figures in the automotive industry. 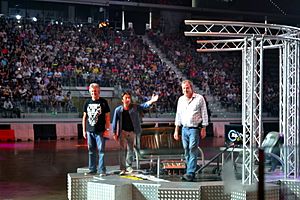 From a career as a local journalist in northern England, Clarkson rose to public prominence as a presenter of the original format of Top Gear in 1988. Since the mid-1990s, he has become a recognised public personality, regularly appearing on British television presenting his own shows for BBC and appearing as a guest on other shows. As well as motoring, Clarkson has produced programmes and books on subjects such as history and engineering. In 1998 he hosted the first series of Robot Wars, and from 1998 to 2000 he also hosted his own talk show, Clarkson.

In 2015 the BBC decided not to renew Clarkson's contract with the company after a dispute with a Top Gear producer while filming on location. That year, Clarkson and his Top Gear co-presenters and producer Andy Wilman formed the production company W. Chump & Sons to produce The Grand Tour for Amazon Video. In 2018 he presented the 20th anniversary specials of Who Wants to Be a Millionaire? for ITV.

His opinionated but humorous writing and presenting style has often provoked public reaction. His actions as a Top Gear presenter have also sometimes resulted in criticism from the media, politicians, pressure groups and the public. He also has a significant public following, being credited as a major factor in the resurgence of Top Gear as one of the most popular shows on the BBC. 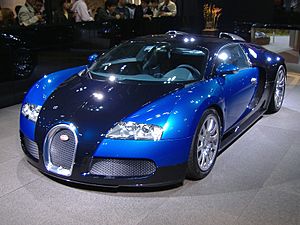 Clarkson is passionate about engineering, especially pioneering work. In Inventions That Changed the World Clarkson showed the invention of the gun, computer, jet engine, telephone and television. He has previously criticised the engineering feats of the 20th century as mostly improvements on the truly great inventions of the Industrial Revolution. Despite this, he also has a passion for many modern examples of engineering. In Speed and Extreme Machines Clarkson rides and showcases numerous vehicles and machinery. Clarkson was awarded an honorary degree from Brunel University on 12 September 2003, partly because of his work in popularising engineering.

In a Top Gear episode, Clarkson drove the Bugatti Veyron in a race across Europe against a Cessna private aeroplane, which he won. The Veyron was an £850,000 technology demonstrator project built by Volkswagen to become the fastest production car, but a practical road car at the same time.

All content from Kiddle encyclopedia articles (including the article images and facts) can be freely used under Attribution-ShareAlike license, unless stated otherwise. Cite this article:
Jeremy Clarkson Facts for Kids. Kiddle Encyclopedia.