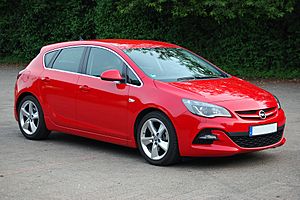 Vauxhall is a car manufacturer. The company was founded in London in 1903 and was named after the area of the city where it was created. The company is based in Luton, Bedfordshire. They have 2 factories, 1 in Luton for production of the Vivaro van and 1 in Ellsmere Port for production of the Astra family car. In March 2017, Vauxhall and parent brand Opel were brought by PSA, the company who owns Peugeot and Citroen.

All content from Kiddle encyclopedia articles (including the article images and facts) can be freely used under Attribution-ShareAlike license, unless stated otherwise. Cite this article:
Vauxhall Motors Facts for Kids. Kiddle Encyclopedia.