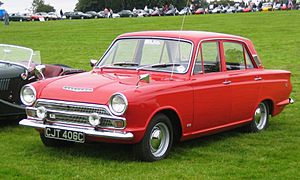 Ford Cortina was a car produced by Ford Motor Company from 1962 through 1982. From 1970 onwards, it was almost identical to Ford Taunus. It was a very popular and common car in the UK during its time. It was still selling well by the time the Sierra replaced it in 1982, but stocks of the Cortina continued for a while afterwards.

All content from Kiddle encyclopedia articles (including the article images and facts) can be freely used under Attribution-ShareAlike license, unless stated otherwise. Cite this article:
Ford Cortina Facts for Kids. Kiddle Encyclopedia.