The town was originally established on the River Mersey at the entrance to the Ellesmere Canal. As well as a service sector economy, it has retained large industries including Stanlow oil refinery, a chemical works and the Vauxhall Motors car factory. There are also a number of tourist attractions including the National Waterways Museum, the Blue Planet Aquarium and Cheshire Oaks Designer Outlet. 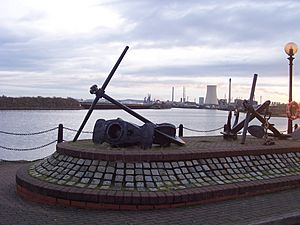 The town of Ellesmere Port was founded at the outlet of the never completed Ellesmere Canal. The canal now renamed was designed and engineered by William Jessop and Thomas Telford as part of a project to connect the rivers Severn, Mersey and Dee. The canal was intended to be completed in sections. In 1795 the section between the River Mersey at Netherpool and the River Dee at Chester was opened. However the canal was not finished as first intended; it never reached the River Severn. Upon reevaluation it was decided that the costs to complete the project were not projected to be repaid because of a decrease in expected commercial traffic. There had been a loss of competitive advantage caused by steam engine-related economic advances (nationally, regionally and locally) during the first decade of canal construction. During or before the construction of the canal the village of Netherpool changed its name to the Port of Ellesmere, and by the early 19th century, to Ellesmere Port.

Settlements had existed in the area since the writing of the Domesday Book in the 11th century, which mentions Great Sutton, Little Sutton, Pool (now Overpool) and Hooton. The first houses in Ellesmere Port itself, however, grew up around the docks and the first main street was Dock Street, which now houses the National Waterways Museum. Station Road, which connected the docks with the village of Whitby, also gradually developed and as more shops were needed, some of the houses became retail premises. As the expanding industrial areas growing up around the canal and its docks attracted more workers to the area, the town itself continued to expand. Whitby was a township in the ancient parishes of Eastham and Stoak, Wirral hundred, which became a civil parish in 1866. It included the hamlets of Ellesmere Port and Whitbyheath. To enhance the economic growth of the area, the Netherpool, Overpool and Whitby civil parishes were abolished on 1 April 1911 to become parts of the new civil parish of Ellesmere Port. 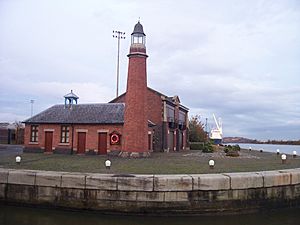 By the mid-20th century, thanks to the opening of the Manchester Ship Canal in 1894 and the Stanlow Oil Refinery in the 1920s, Ellesmere Port had expanded so that it now incorporated the villages of Great and Little Sutton, Hooton, Whitby, Overpool and Rivacre as suburbs. The town centre itself had moved from the Station Road/Dock Street area, to an area that had once been home to a stud farm (indeed, the former Ellesmere Port and Neston Borough Council officially referred to the town centre as Stud Farm for housing allocation purposes) around the crossroads of Sutton Way/Stanney Lane and Whitby Road.

In the 20th century, a number of new housing estates were developed, many of them on the sites of former farms such as Hope Farm and Grange Farm. Many estates consisted of both council housing and privately owned houses and flats.

Ellesmere Port, in more recent times has had an influx of Liverpool immigrants. Thus demand for housing increased with the opening of the Vauxhall Motors car plant in 1962. Opened as a components supplier to the Luton plant, passenger car production began in 1964 with the Vauxhall Viva. The plant is now Vauxhall's only car factory in Britain, since the end of passenger car production at the Luton plant in 2004 (where commercial vehicles are still made). Ellesmere Port currently produces the Vauxhall Astra model on two shifts, employing 2,500 people.

In the mid-1980s, the Port Arcades, a covered shopping mall was built in the town centre. By the 1990s, it was the retail sector rather than the industrial that was attracting workers and their families to the town. This was boosted with the building of the Cheshire Oaks outlet village and the Coliseum shopping park, which also included a multiplex cinema; prior to this since the closure of the cinema in Station Road, Little Sutton (King's cinema) and the Queen's cinema adjacent to Ellesmere Port railway station in the 1960s the town's only cinema had been a single screen in the EPIC Leisure Centre.

Since 1974 Ellesmere Port has been an unparished area when the civil parish of Ellesmere Port was abolished and all its functions assumed by the town.

The town continues to grow and expand, and more housing estates and shops are being built. The industrial sector is still a major employer in the town although in recent years, a number of factories have been closed and jobs lost. Marks & Spencer have built (September 2012) what is being claimed to be their largest store apart from Marble Arch on a site opposite to the Coliseum shopping park. 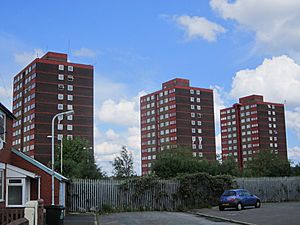 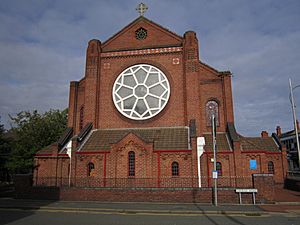 Our Lady Star of the Sea Catholic Church

Ellesmere Port is located in the county of Cheshire.

Ellesmere Port is located near the interchange of the M56 and the M53 motorways. The A41 road between Birkenhead and Chester, also passes through the area. The M56 carries the European Route E22 in this area.

Ellesmere Port railway station is on the Wirral line of the Merseyrail network and has a half-hourly electric train service to Liverpool via Birkenhead. The line was electrified from Hooton to Ellesmere Port by British Rail in 1994. There is also an infrequent service to Warrington.

The Manchester Ship Canal joins the Mersey estuary north-west of Ellesmere Port at Eastham, but the town is also the northern terminus of the Shropshire Union Canal (which used to exchange goods with seagoing boats at what is now the National Waterways Museum). 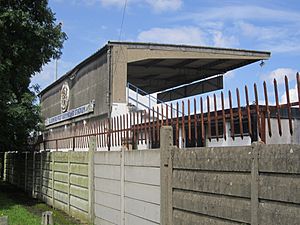 Speedway racing operated at the stadium in Thornton Road in the mid to late 1970s and in the 1980s; since March 2013, the stadium has been back in use for greyhound racing. Ellesmere Port Gunners raced in the lower tier Leagues. The Gunners' best season was their last, 1985, when they won the National League championship. The campaign was marred by a career-ending injury sustained by inspirational captain Joe Owen. Owen was hurt in a track crash at Birmingham. Ellesmere Port Town F.C. was once of town's main football team before the founding of Vauxhall Motors F.C. in 1963. Ellesmere Port Town F.C. was founded in 1948 and folded in 1973. The club's main achievements were playing in the Northern Premier League (The 7th tier in the English Football Pyramid) and reaching the F.A. Cup First Round in the 1971–1972 season, losing 3–0 to Boston United. Vauxhall Motors F.C. are the local football team.

In 2009 Eddie Izzard and his run around the UK for Sport Relief saw him pass through Little Sutton village centre and Hooton. The footage is only minutes long however.

Construction began in January 2014 for the new multimillion-pound Sports Village in Stanney Grange which initially was to incorporate an Olympic sized swimming venue (now smaller), tennis courts, football pitches and other sport halls, and will be the new home of Cheshire Phoenix, the local professional British Basketball League team from the start of the 2015/16 BBL Championship season. The village is situated on site of the old Stanney High School by Cheshire Oaks, the Coliseum and M&S.

The following people are natives of Ellesmere Port, or have lived there for a period of time.

All content from Kiddle encyclopedia articles (including the article images and facts) can be freely used under Attribution-ShareAlike license, unless stated otherwise. Cite this article:
Ellesmere Port Facts for Kids. Kiddle Encyclopedia.