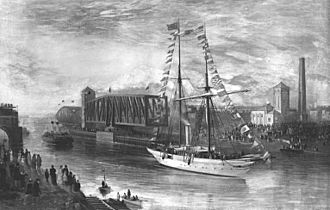 The yacht Norseman headed a convoy of vessels at the canal's opening in January 1894. Seen passing the Barton Swing Aqueduct, it carried the company's directors.

The Manchester Ship Canal is a wide, 36-mile (58 km) long, river navigation in North West England, opened on 21 May 1894. At the time of its completion, it was the largest navigation canal in the world.

The "Big Ditch", as it is sometimes known, consists of the rivers Irwell and Mersey made navigable for seagoing ships from the Mersey Estuary to Salford Docks in Greater Manchester. It transformed Manchester from a landlocked city into a major sea port.

All content from Kiddle encyclopedia articles (including the article images and facts) can be freely used under Attribution-ShareAlike license, unless stated otherwise. Cite this article:
Manchester Ship Canal Facts for Kids. Kiddle Encyclopedia.