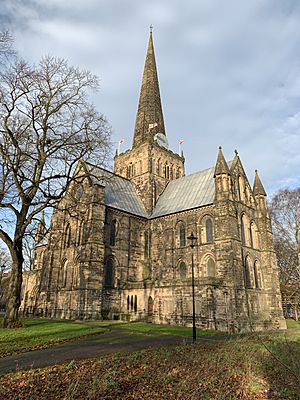 His parents were James Overend (1821 – 2 November 1875), a flax spinner, born in Bentham, Yorkshire, and Martha née Hodgson (1824 – 1886), born in Hawkshead, Lancashire and the daughter of Braithwaite Hodgson, a wealthy landowner. The family lived in Priestgate, Darlington in the 1850s, but the 1861 census found them living at No, 2, Buccleuch Terrace, Hackney. By now, his father was a railway contractor.

Overend was educated at both Charterhouse School,where he only spent one year, and Bruce Castle School, where he remained until 1867. He was already showing early promise as Athol states that a sketch drawn by him at age 14, of a boarding party, would not have disgraced a student of the Royal Academy.

After leaving Bruce Castle School in the summer of 1857, Overend spend the next three years in the studio of Davis Cooper, son of Abraham Cooper RA. Here he went through the traditional course of art training, but continued to teach himself after leaving the studio. By 1871, he was a lodger, with the profession of artist (painter), together with Edward Overend, an unemployed Naval Engineer, in a small lodging house at 14 Clapton Terrace in Hackney, London. 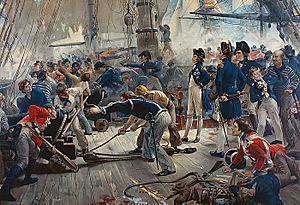 Trafalgar by William Haysham Overend. This painting was displayed posthumously in the Royal Academy in 1898.

Beginning as a painter, Overend moved into illustration. His connection with the Illustrated London News began in 1875 when he illustrated the Sir George Nares Artic expedition. For the next decade at least he was second only to Richard Caton Woodville as an illustrator for the paper. Overend also illustrated articles in The English Illustrated Magazine from 1891, Good Words from 1894, The Rambler from 1897, The Pall Mall Magazine, and the juvenile periodicals The Boy's Own Paper, and Chums from 1892, Overend also drew for The Illustrated Naval and Military Magazine, The Graphic, The Magazine of Art, and The Leisure Hour, London Society, St. Nicholas, and The Penny Illustrated Paper.

Overend's work was characterised by thoroughness. He maintained a stock of uniforms and weapons to serve as models for his drawings. During the 1891 Naval Exhibition at Chelsesa (2 May 1891 – October 1891) he loaned the following to the exhibition from his collection:

Overend was not just an artist, but an engraver. He records his occupation as steel engraver in the 1891 census. Newbolt notes that Overend probably carved the woodcuts for some of his illustrations, including for the six illustrations for G. A. Henty's A Chapter of Adventures.

Overend was elected a member of the Royal Institute of Painters in Oils on 27 January 1886. He was elected to the Council of the Navy Records Society in 1897. These two elections illustrate that his work was recognised not only by his artistic peers, but also by naval historians.

One of the strangest things about Overend is that he was a landsman, bred and born. He was b miles from the coast, and had no relatives in either the merchant or naval service, yet his knowledge of past and present ships of war was matched by few sailors. The following illustrations were drawn by Overend for the Illustrated Naval and Military Magazine in 1884 for articles on the development of naval warfare.

An August Morning with Farragut 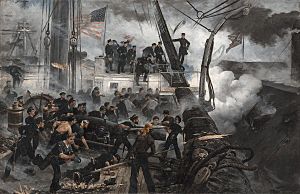 An August morning with Farragut; the Battle of Mobile Bay, 5 August 1864

An August morning with Farragut; the Battle of Mobile Bay, 5 August 1864 is Overend's greatest work. The painting is enormous, being 3.048m (10 feet) wide by 1.969m (6 feet 5½ inches) high. It was painted in oils on canvas. Overend was commissioned by the Fine Art Society, an art gallery with showrooms in London and Glasgow, to produce a painting of a naval battle of the American Civil War. Kirkpatrick states that Overend was commissioned to paint Admiral Porter's conquest of New Orleans, and that the Farragut painting was additional. Kirkpatrick further states that the Farragut painting was painted while Overend was in the United States. However, Mayhew, who was a colleague of Overend's, makes no reference to the New Orleans painting, but states that from the first the commission was for what became the Farragut painting, he also states that the work was painted in Overend's Ormond Street studio in London.

Overend attacked the commission with his usual thoroughness. He left Liverpool for New York, arriving on the RMS Scythia on 4 October 1882. Knowing virtually no-one in the United States, but supplied with letters of introduction from the US Minister in London to the navy department at Washington, he went vigorously to work to collect his material. He visited the ship to sketch it. He collected naval uniforms, plans, arms, sketches, photographs, and studies. He interviewed survivors and enlisted the aid of Farragut's son, a Naval Captain, in his researches. Overend painted the officers and men from photographs taken after their arrival in New Orleans.

Overend returned to London with all the reference material he had collected to paint the picture. While in the United States Overend visited the 1883 Columbian Exhibition in Chicago where he exhibited a painting, Victory!: the Prize Crew taking possession, and some drawings.

The title of the work, and even the work itself, were both drawn from a vivid account of the battle of Mobile harbour by J. C. Kinney which was published in the June 1881 edition of Scribner's Magazine under the title An August Morning with Farragut. The incident described in the painting can briefly be described as follows. On the morning of 4 August 1864 Admiral Farragut's fleet, consisting of 14 ships and four monitors forced their way past the forts protecting Mobile Bay. The Admiral was about his flagship, the Hartford, a wooden hulled combined steam-and-sail ship. On 5 August 1864, the steam-powered ironclad Confederate ram CSS Tennessee, the flagship of the small Confederate fleet of four ships, attempted to ram the Hartford. It struck the Hartford a glancing blow on the port bow and then the ships ground past each other, the moment captured in the painting. In the painting, the observer seems to be at the port taffrail amidships on the Hartford, looking backwards towards the wheel and quarter-deck. The Tenessessee is grinding along the port side of the Hartford moving deeper into the scenne. Farragut is shown standing on the quarter-rail holding onto the rigging, where tradition holds that the lashed himself on in case he were hit.

Overend returned from America and painted the work in his painting in 1883 in his Ormonde Street Studio. The Pall Mall Gazette of 1 November 1883 announced that the Fine Art Society would shortly be selling prints of the painting. The painting was on display in the premises of James S Earle and Sons, in Philadelphia in September 1884. In 1885 G. A. R. Dorchester were selling prints of the painting for 25 cents each.

The painting was valued at $4,000 when it was displayed in at an art dealer's in Buffalo, New York in May 1885. It was also displayed in other towns throughout the US including Cedar Rapids, Iowa, and finally in Hartford, Connecticutin January 1886. Hartford was the town for which Farragut's flagship was named.

By February the local newspaper, the Hartford Courant, had already begun a campaign to purchase the picture for Hartford, with the intent to donate the painting the free picture gallery in the Wadsworth Atheneum. The newspaper estimated the painting was worth $10,000 but could be obtained for about one third of this price. Three subscribers had already contributed $100 each to the fund. The subscription was successful as the painting was hung in the Wadsworth Athenaeum in c. May 1886.

Kirkpatrick lists over 100 books illustrated by Overend for over four dozen authors. The authors he illustrated for included:

The following illustrations were drawn for A Chapter of Adventures (1890) by G. A. Henty. These were wood-cuts, and Newbolt suggests that Overend did his own engraving for the woodcuts he did for Blackie.

Overend illustrated not only juvenile fiction, but also books for adults, such as George Smith's campaigning book about the treatment of Gypsies or William Clark Russell's novel A Strange Elopement (1892) in which a young man carries off, in mid-ocean, a young woman from the custody of the most truculent and vigilant of fathers. This had first appeared as a serial in The English Illustrated Magazine, starting with the October 1891 edition.

Overend died at his residence, 17 Southampton Street (now named Conway Street), Fitzroy Square, in London, on the evening of Friday, 18 March 1898. The death certificate gave a number of causes of death including Locomotor ataxia which is often a symptom of tertiary syphilis. Other causes included Catarrh of the Bowels (diarrhoea), and Albuminuria, an indicator of kidney disease. His doctor stated that he had been suffering for ten years. The columnist on the Penny Illustrated Paper noted that Overend had never been strong since he injured his leg, and that he had complained of Catarrh of the Bowels the last time he had dropped a drawing off at the Illustrated London News. He was buried on Wednesday, 23 March 1898 in Tottenham Cemetery. His estate was valued at over £3,000, a very respectable sum for the period.

Despite his early death "he did a prodigious amount of work in his comparatively short life". An obituary in the Army and Navy Gazette noted that "he was recognized as the foremost exponent of naval art, the only man who could at once satisfy his brother artists, the student of naval history, and the professional seaman . . . His knowledge of the detail of the old ships was unequalled, and his accuracy in matters naval, both archaeological and of the present day, was proverbial. Modest, unassuming, and amiable, no man was more cordially liked by his professional brethren, while the high appreciation in which he was held by those who cherish naval art and literature was shown by his election to the council of the Navy Records Society."

The headmaster of Charterhouse, twenty years after Overend left the school, wrote to him to request material for the Greyfriars magazine, produced by former pupils, and referred to him as "the most distinguished draughtsman the school had ever turned out." The Arts Club said of him: "A painter and black-and-white artist of great ability; held in affection by every member of the club." This was not a graveside eulogy, but a description of him more than 20 years after his death.

All content from Kiddle encyclopedia articles (including the article images and facts) can be freely used under Attribution-ShareAlike license, unless stated otherwise. Cite this article:
William Heysham Overend Facts for Kids. Kiddle Encyclopedia.