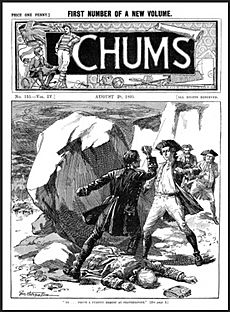 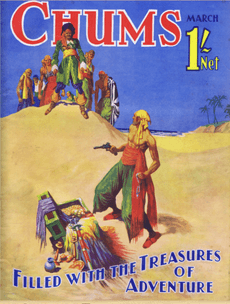 A cover from the early 1930s, by Cecil Glossop

Chums was a boys' weekly newspaper started in 1892 by Cassell & Company and later, from 1927, published by Amalgamated Press. The publisher gathered the weekly paper into monthly and annual editions. The monthly versions were published on the 25th of the month, and up to November 1920 included all the content of the weekly editions. From then on, the monthly editions had all the story content of the weeklies, but left out the covers. This left a gap which was then filled by short stories, articles and even serials that were not included in the weekly edition.The serial ceased publication in 1941.

Chums was notably the sponsor of the Chums League, Chums Society of Stamp Collectors, Chums Scouts, the British Boy Scouts and the British Boys Naval Brigade/National Naval Cadets. Chums is one of the most highly sought after boys' papers by collectors due to its distinctive and attractively illustrated red covers.

Chums was issued in three different formats, weekly, monthly and annually. While initial published as a weekly paper, a monthly edition was issued including all the weekly issues with a color cover. Some material were only included in the weekly or monthly formats. In the weekly this showed up as an eight-page article insert pages numbered i-viii. The monthly had a color print included.

Chums' "On the Watch Tower" news column reported on 11 September 1907 that Robert Baden-Powell's Brownsea Island Scout camp was proposed and his recommendation that Boy Scout groups should be formed. In the 12 February 1908 issue, the editor indicated there was a reader proposing to start a scout company under the "Chum Scout" name and suggested that they wear the 'Chums' League badge. In the next issue, the editor indicated more readers had written in about starting a League of Chums Scouts with a reply that they were in discussions with Baden-Powell. The following issue had an article on the Brownsea Island Camp by Baden-Powell and indicated future news on the proposed 'Chums' League of Scouts. However, the publication then fell silent on the 'Chum' Scouts. In October 1908, a recurring character, Waggles, made fun of boy scouts. The silence, then the turnabout to being negative may have stemmed from C. Arthur Pearson Limited launching "The Scout" paper which was denoted as 'Founded by" Baden-Powell and the "Official Journal" of Baden-Powell's own Boy Scout organization.

In June 1909, Chums started including boy scout stories. In the 30 June issue, the editor's column indicated that the Chum scouts patrols were still going "strong" and that a union of the various patrols was being considered. Chums announced the launch of the British Boy Scouts as a national organisation in the 21 July 1909 issue. A British Boy Scout column was included in future issues, later becoming a full page. Chums indicated in late December that the BBS had gained members in Australia, Africa, and Canada. Chums also includes some of the earliest references to "Sea Scouts". In mid-1911, the BBS column ended when the original BBS leaders, H. Moore and W.G. Whitby, left the BBS.

In March 1909, Chums sponsored The British Boys Naval Brigade, a uniformed youth organization for boys ages 10 to 17. With the Brigade's launch in May as a national organization, it changed its name to The National Naval Cadets. The organization's columns in Chums were of an instructional nature rather than a news journal. Chums was also used as an enrolment tool. By June articles on the National Naval Cadets subtitled it, first as "Scouts of the Sea" then later "Sea Scouts of the Empire".

The British Boy Scouts and National Naval Cadets were both headquartered in Battersea, London. Chums referred to them together as Chums United Service.

The following list of authors is by no means complete:

All content from Kiddle encyclopedia articles (including the article images and facts) can be freely used under Attribution-ShareAlike license, unless stated otherwise. Cite this article:
Chums (paper) Facts for Kids. Kiddle Encyclopedia.