Kids Encyclopedia Facts
This page is about the area of London. For the car company, see Vauxhall Motors. For other uses, see Vauxhall (disambiguation).

Vauxhall is a mixed commercial and residential district of southwest London in the London Borough of Lambeth. Vauxhall formed part of Surrey until 1889 when the County of London was created.

It has also given its name to the Vauxhall parliamentary constituency, which extends to include all of Stockwell and parts of Brixton and Clapham all to the south, and to the Vauxhall Motors car manufacturer, which originated in the area, and possibly also to the Russian word for a large railway station.

Its economy was for more than a century until the late 20th century predominantly manual workers' homes and business premises such as works for the local railway, a former water supply works heavily contrasting with the mixed and frequently higher professional occupations of neighbouring districts, particularly Kennington and Westminster. Similar to neighbouring Battersea a riverside redevelopment conversion into residential property, three acres of parkland and an iconic government building have recharacterised its architecture and altered its economy to resemble adjoining districts, retaining affordable and social housing particularly southwest of its station close to the South Western Main Line on land which was once heavy industrial and overcrowded terraces.

Since 1998, the categorical part of Vauxhall closest to its railway station has in planning policy been designated part of the Lambeth Borough's north borough town centre housing many types of office, leisure and retail buildings.

Vauxhall is 2.1 km south of Charing Cross and 1.5 km southwest of the actual centre of London at Frazier st near Lambeth North tube station.

A map showing the Vauxhall ward of Lambeth Metropolitan Borough as it appeared in 1916.

It is generally accepted that the etymology of Vauxhall is from the name of Falkes de Breauté, the head of King John's mercenaries, who owned a large house in the area, which was referred to as Faulke's Hall, later Foxhall, and eventually Vauxhall. The area only became generally known by this name when the Vauxhall Pleasure Gardens opened as a public attraction. Initially most visitors would have approached by river, but crowds of Londoners of all classes came to know the area after the construction of Westminster Bridge in the 1740s.

There are competing theories as to why the Russian word for a central railway station is вокзал (vokzal), which coincides with the canonical 19th-century transliteration of "Vauxhall". It has long been suggested that a Russian delegation visited the area to inspect the construction of the London and South Western Railway in 1840, and mistook the name of the station for the generic name of the building type. This was further embellished into a story that the Tsar Nicholas I of Russia, visiting London in 1844, was taken to see the trains at Vauxhall and made the same mistake.

The locality of the L&SWR's original railway terminus, Nine Elms Station, was shown boldly and simply as "Vauxhall" in the 1841 Bradshaw timetable. Another likely explanation is that the first Russian railway, constructed in 1837, ran from Saint Petersburg via Tsarskoye Selo to Pavlovsk Palace, where extensive Pleasure Gardens had earlier been established. In 1838 a music and entertainment pavilion was constructed at the railway terminus. This pavilion was called the Vokzal in homage to the Vauxhall Pleasure Gardens in London. The name soon came to be applied to the station itself, which was the gateway that most visitors used to enter the gardens. It later came to mean any substantial railway station building (a different Russian word, станция (stantsiya), is used for minor stations).

The word "voksal" (воксал) had been known in the Russian language with the meaning of "amusement park" long before the 1840s and may be found, e.g. in the poetry of Aleksandr Pushkin: На гуляньях иль в воксалах / Легким зефиром летал (To Natalie (1813): "At fêtes and in voksals, /I've been flitting like a gentle Zephyrus" [here "Zephyrus" is an allegory of a gentle, warm and pleasant wind ]) According to Vasmer, the word is first attested in the Saint Petersburg Vedomosti for 1777 in the form фоксал, which may reflect an earlier English spelling, Faukeshall. Englishman Michael Maddox established a Vauxhall Gardens in the Saint Petersburg suburbs (Pavlovsk) in 1783, with pleasure gardens, a small theatre/concert hall and places for refreshment. Archdeacon William Coxe describes the place as a "sort of Vauxhall" in that year, in his Travels into Russia.

There is no mention of Vauxhall in the 1086 Domesday Book. The area originally formed part of the extensive Manor of South Lambeth, which was held by the de Redvers family. Falkes de Breauté acquired it in 1216 when he married Margaret, widow of Baldwin de Redvers; de Breauté's lands reverted to the de Redvers family after his death in 1226. In 1293 South Lambeth Manor and the Manor of "la Sale Faukes" passed, probably by trickery, to Edward I. In 1317 King Edward II granted the manor of Vauxhall, Surrey, to Sir Roger d'Amory for his "good services" at the Battle of Bannockburn.

The land was flat and parts were marshy and poorly drained by ditches, and only started to be developed with the draining of Lambeth Marsh in the mid-18th century, but remained a village. Prior to this it provided market garden produce for the nearby City of London. Vauxhall Bridge and Vauxhall Bridge Road were opened in 1816. By 1860 the village had been subsumed by the town of Lambeth. Many of Vauxhall's streets were destroyed during the construction of the railway to Waterloo station, by German bombing in World War II or ravaged through poor city planning.

Many Vauxhall residents live in social housing. There are several gentrified areas, and areas of terraced townhouses on streets such as Fentiman Road and Heyford Avenue have higher property values in the private market; however, by far the most common type of housing stock in Vauxhall is flats, both conversions and purpose built blocks. Vauxhall is also a popular residential area for members of parliament and civil servants due to its proximity to the Houses of Parliament and Whitehall; Kennington is within the area wired for the Commons' Division bell. Some 18th and 19th century property also survives – most famously Bonnington Square, a community that emerged from the 1970s–1980s squat scene in London and remains as mostly housing co-operatives today.

Vauxhall is a very ethnically diverse area, with approximately 40% of residents originating from a non-white ethnic group. There is a significant Portuguese community, some with a connection to Madeira; many Portuguese restaurants and bars are located in South Lambeth Road and the surrounding area. There is also a significant Muslim community, with almost 6% of residents declaring themselves as Muslim in the 2001 census.

The explosion in London property prices during the late 1990s and early 2000s has led to a boom in riverside construction, such as the large St George Wharf development by Vauxhall Bridge. 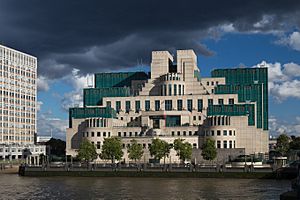 The Vauxhall Cross headquarters of the Secret Intelligence Service

By Vauxhall Bridge stands the central headquarters of the British Secret Intelligence Service (more commonly referred to as MI6), which occupies offices built between 1989 and 1992 and commonly referred to as Vauxhall Cross. Since 1992 a large complex of apartments and offices has been built to the south of Vauxhall Bridge at St George Wharf. Part of this development includes the St George Wharf Tower, completed in 2014.

The MI6 building has featured in several James Bond films, initially filmed without permission but then condoned by then Foreign Secretary Robin Cook with his memorable "After all James Bond has done for Britain..." quip. It appears in GoldenEye, The World Is Not Enough (wherein it suffers a fictional terrorist attack that prefigured a genuine incident), Die Another Day, Skyfall (where it also comes under a fictional terrorist attack) and Spectre (2015) (where it is demolished). Die Another Day featured a fictional London Underground station, Vauxhall Cross, a fictional closed stop on the Piccadilly line now employed by MI6 as an extension to its HQ. (In fact, the Piccadilly line does not come south of the river at all; only the Victoria line passes anywhere nearby, and the secret entrance to the station shown in the film is on the east side of Westminster Bridge, some considerable distance downriver.)

Vauxhall is also home to Brunswick House, a listed Georgian mansion and former home to the Dukes of Brunswick. Built in 1758, it once stood in three acres of riverside parkland – now it sits overshadowed by the St George Wharf complex. The building was in a state of disrepair and was on the English Heritage 'Buildings at Risk' list until LASSCO (the London Architectural Salvage and Supply Company) acquired it in 2004 and restored it as a premises from which to sell architectural salvage. It also has a restaurant and is an events venue.

St Peter's Church in Kennington Lane was designed by the 19th century architect John Loughborough Pearson, who also designed Truro Cathedral and Brisbane Cathedral in Australia, as well as being responsible for restoration work at Rochester, Bristol, Peterborough, and Lincoln cathedrals. As of 2015[update] the church building serves as a community centre and arts venue as well as a church. Next to St Peter's is Vauxhall City Farm.

Vauxhall is well connected even by central London standards. London Underground, National Rail trains, and London buses are all available at Vauxhall station. The tube stop is on the boundary of zones 1 and 2 of the London Travelcard area on the Victoria line, and Northern line stations are within walking distance of many parts of Vauxhall. The railway station is served by South West Trains to and from London Waterloo, which is one stop away. The bus station has 14 routes serving various parts of London.

The availability of underground, trains, and buses has given Vauxhall a PTAL rating of 6b at its centre.

In addition to public transport, Vauxhall is accessible by major roads and the Thames Path pedestrian and bicycle trail. Vauxhall also has two 17 space Santander Cycles docking stations and Cycle Superhighway 7 runs through the area. 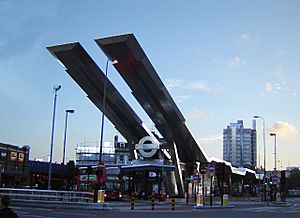 The Vauxhall Cross transport interchange, 2005. The solar panels supply energy for 60% of the bus station's lighting.

Vauxhall Cross is immediately to the southeast of Vauxhall Bridge where six major roads converge, including the Albert Embankment, which exits the Cross to the north and is the southernmost point of entry into the London congestion charge area. Vauxhall Cross was described as "one of the most unpleasant road junctions in South London" in Nikolaus Pevsner's architectural guide to London. Through 2002 to 2004 the Cross underwent a gradual redesign to accommodate a bus interchange linked to the Vauxhall mainline railway and tube stations, both of which are located to the southeastern end of the cross.

Work has involved design changes to traffic lanes, improved pedestrian and cycle crossings, refurbishment of walkways beneath the mainline railway viaduct, and the construction of a bus station, completed in December 2004 featuring an undulating steel-frame canopy and ribbed steel walls. An interesting feature of the canopy is a series of photoelectric cells generating electricity to offset the energy used by the bus station.

Vauxhall Park contains an area of miniature model houses (also in Fitzroy Gardens, Melbourne) as well as tennis courts, day care in the "one o'clock club", and children's playground. It is open daily for recreation and has an "open day" once a year.

Vauxhall City Farm, located within Vauxhall Pleasure Gardens is open daily and contains a range of animals including alpacas, sheep, goats and pigs.

VGERTA's biggest success to date is the fundraising of £165,000 for the full regeneration of the Glasshouse Walk Playground that was successfully completed in July 2013.

All content from Kiddle encyclopedia articles (including the article images and facts) can be freely used under Attribution-ShareAlike license, unless stated otherwise. Cite this article:
Vauxhall Facts for Kids. Kiddle Encyclopedia.