The Cathedral of the Blessed Virgin Mary, Truro is a Church of England cathedral in the city of Truro, Cornwall. It was built between 1880 and 1910 to a Gothic Revival design by John Loughborough Pearson on the site of the parish church of St Mary. It is one of only three cathedrals in the United Kingdom with three spires. 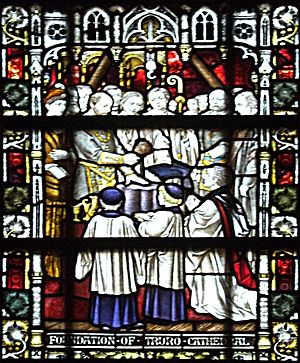 A stained glass window depicting the founding of the cathedral.

The See (or Diocese) of Truro was established in 1876, and its first bishop, Edward White Benson, was consecrated in 1877. Truro was the first cathedral to be built on a new site in England since Salisbury Cathedral in 1220.

Construction began in 1880 to a design by the leading Gothic Revival architect John Loughborough Pearson. It was built on the site of the 16th-century parish church of St Mary the Virgin, a building in the Perpendicular style with a spire 128 feet tall. St Mary's was demolished in October 1880, leaving only the south aisle, which was retained to serve as the parish church. From 1880 until 1887 a temporary wooden building on an adjacent site served as the cathedral. It accommodated fewer than 400 people and was extremely hot in summer and cold in winter. It was in this building that Benson introduced the new evening service of Nine Lessons and Carols on Christmas Eve, 1880. By October 1887 the choir and transepts were complete and the service of consecration took place on 3 November. The delay was caused by the wish to allow Edward Benson, by that time Archbishop of Canterbury, to attend. His successor, George Wilkinson and twenty other bishops were also present, together with civic representatives and diocesan clergy, and about 2,000 other people.The central tower was finished by 1905 and the building was completed with the opening of the two western towers in 1910. John Loughborough Pearson died in 1897 and his son Frank took over the project. Frank Loughborough Pearson's other works include St Matthew's, Auckland in New Zealand, a reduced version of Truro Cathedral. 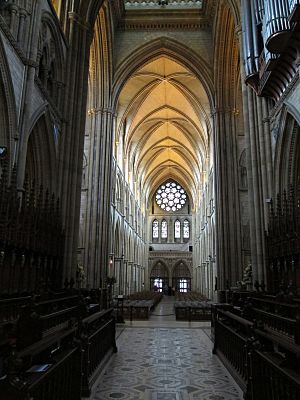 Looking west from the choir, towards the nave and the west rose window.

Pearson's design combines the Early English style with certain French characteristics, chiefly spires and rose windows. Its resemblance to Lincoln Cathedral is not coincidental: Pearson had been appointed as Lincoln's Cathedral architect and the first Bishop of Truro, Edward Benson, had previously been Canon Chancellor at Lincoln. The central tower and spire stands 250 feet (76 m) tall, while the western towers reach to 200 feet (61 m). Four kinds of stone were used: Mabe granite for the exterior, and St Stephen's granite for the interior, with dressings and shafts of Bath and Polyphant stone. The spires and turret roofs are of stone, except for a copper spire over the bell tower at west end of St Mary's Aisle. The other roofs are of slate. The cathedral is vaulted throughout.

The original south aisle of St Mary's Church survives, incorporated into the south-east corner of the cathedral and known as St Mary's Aisle. It still functions as the city centre's parish church. Three brasses were described by Edwin Dunkin in 1882: those of Cuthbert Sydnam (1630), Thomas Hasell (1567) and George Fitzpen, rector of the parish. As the cathedral is dedicated to the Blessed Virgin Mary, it has no Lady Chapel. A Jesus Chapel and the Chapel of Unity and Peace are reserved for quiet and prayer throughout the day.There was no chapter house until 1967 when the opportunity to enlarge the building on the south-east arose. The architect of the new building was John Taylor.

The Royal Maundy Service was held in the cathedral in 1994 when Queen Elizabeth II presented 134 Cornish people with the traditional Maundy money. 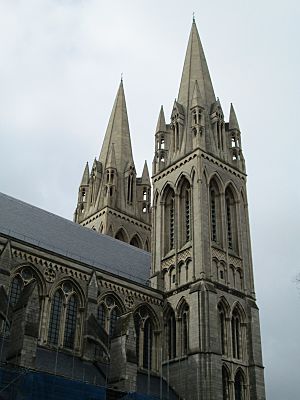 In 2002 the cathedral embarked on what was hoped to be a fifteen-year project to restore the east end, the west front and the central tower and spire. Each of the projects would be undertaken as funds allowed. The east end restoration repaired stonework and damage to the iron work on the stained glass windows. From 2004 to 2005 a year-long project saw the restoration of the massive west front and towers. In 2009 and 2010 work on the central tower and spire has begun. Restoration work is being carried out by W.R. Bedford; Stuart Aston, managing director, said that the problem is the Bath Stone used on the more decorative areas of the cathedral. It has not stood up well to the salts and sand in the maritime climate of Cornwall. Erosion of the stonework has left much of the exposed stonework in such a damaged condition that it resembles honeycomb. Funding for the restoration of the tower and spire has been partly met by grants from English Heritage, Friends of Truro Cathedral, the Heritage Lottery Fund, the Tanner Trust, the cathedral itself and by public subscription. The "Save Our Spire" campaign has raised nearly £50,000 towards the cost. 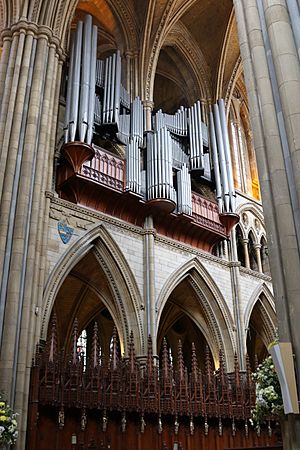 The Father Willis Organ of 1887 is widely regarded as one of the finest instruments in the country. "It is not easy, even today, to think how the magnificence of the Willis organ in Truro Cathedral could be improved" wrote W L Sumner in his 1952 book The Organ. It was built in 1887 in London and arrived in Cornwall by boat. It has an almost identical specification to the organ he built a year earlier for the then parish church of St Michael, Coventry (later Coventry Cathedral). Both instruments have the standard Willis hallmarks – tierce mixtures on Great and Swell, characterful gedackts on the Choir, and a small but telling pedal division.

Apart from the addition of the electric blower in the 1920s, no major work was done until 1963, when the grandson of the original builder carried out a conservative restoration, at a cost of some £17,000. Before this time, the organ console was situated high up within the main case of the instrument, necessitating a walk of two or three minutes up a spiral staircase in the North Transept. The action was a mixture of Barker lever, pneumatic and tracker. There were very few playing aids and contact between the organist and choir, some forty feet below, must have been almost impossible. In 1963, the organ committee decided to keep the original tonal scheme and voicing, and move the console over on to the south side in a new gallery placed above the choir stalls to a design by the architect John Phillips. Here the organist can hear the instrument properly, and maintain close contact with the choir.

The other main organ in the cathedral is a two-manual instrument in St Mary's aisle, the sole remnant of the former parish church. It was originally built by Renatus Harris and was installed in Truro in 1750 by John Byfield. It was re-installed in the temporary church in 1880, but was significantly rebuilt and reduced in size in 1887 for installation in its current location. There is also a four-stop continuo organ by Kenneth Tickell.

See also: List of musicians at English cathedrals
Organist and Master of the Choristers

A peal of ten bells was cast in 1909 by John Taylor & Co of Loughborough: the tenor bell weighs 33-3-10. Four further bells, also cast by Taylor, were installed in 2011: two completing the original ring to twelve, and two smaller ones to give the option of a lighter sound. In addition there are six bells in the Green Tower, previously in St Mary's Parish Church, of which five form a chiming peal. A planned great bourdon bell for the south-west tower was never made.

Truro Cathedral has had an unbroken tradition dating to the 1880s. The present-day choir has twelve adult singers who are either lay vicars or choral scholars and they are accompanied by either eighteen boy choristers or eighteen girl choristers. Girls were allowed to join beginning in September 2015. Following the closure of Truro Cathedral School, the cathedral no longer has a dedicated cathedral school. Instead, choristers are awarded bursaries to attend Polwhele House Preparatory School (boys) and Truro School (girls).

All content from Kiddle encyclopedia articles (including the article images and facts) can be freely used under Attribution-ShareAlike license, unless stated otherwise. Cite this article:
Truro Cathedral Facts for Kids. Kiddle Encyclopedia.