Diocese of Truro facts for kids 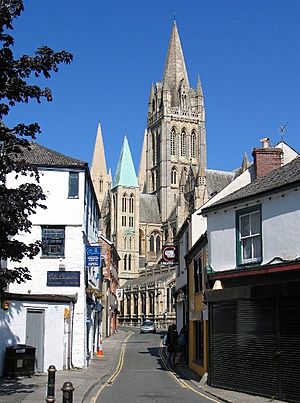 The Diocese of Truro is a Church of England diocese in the Province of Canterbury. The area included in the diocese is that of the county of Cornwall including the Isles of Scilly. It was formed in 1876 from the western parts of the Diocese of Exeter and the first bishop was appointed in 1877. The Christian faith has been alive in the region since at least the 4th century AD. Many of the communities in the diocese, as well as the parish churches, bear a Celtic saint's name, which is a reminder of the links with other Celtic lands. The head of the diocese is the bishop of Truro, Tim Thornton, and the cathedral is in Truro. There are 225 parishes with a little more than 300 church buildings in the diocese.

All content from Kiddle encyclopedia articles (including the article images and facts) can be freely used under Attribution-ShareAlike license, unless stated otherwise. Cite this article:
Diocese of Truro Facts for Kids. Kiddle Encyclopedia.