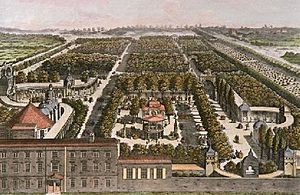 A prospect of Vauxhall Gardens in 1751

Vauxhall Gardens /vɒks'ɔ:l/ was a pleasure garden, one of the leading places for public entertainment in London, England from the mid 17th century to the mid 19th century.

The site became Vauxhall Gardens in 1785 and money was charged to gain entry. In 1817, the Battle of Waterloo was re-played with 1,000 soldiers taking part. The park closed in 1859 and the land was sold to become buildings.

All content from Kiddle encyclopedia articles (including the article images and facts) can be freely used under Attribution-ShareAlike license, unless stated otherwise. Cite this article:
Vauxhall Gardens Facts for Kids. Kiddle Encyclopedia.