James Boswell, 9th Laird of Auchinleck 29 October 1740 – 19 May 1795), was a Scottish biographer and diarist, born in Edinburgh. He is best known for the biography he wrote of one of his contemporaries, the English literary figure Samuel Johnson, which is commonly said to be the greatest biography written in the English language. 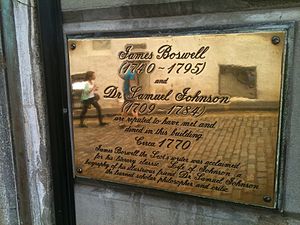 When the Life of Samuel Johnson was published in 1791 it at once received the admiration that Boswell had sought for so long. Its style was unique in that, unlike other biographies of that era, it directly incorporated conversations that Boswell had noted down at the time for his journals. He also included far more personal and human details than those to which contemporary readers were used to. Instead of writing a respectful and dry record of Johnson's public life in the style of the time, he painted a vivid portrait of the complete man, brought to life through a 'dramatic' style of dialogue. It has often been described as the greatest biography ever written.

In the 1920s a great part of Boswell's private papers, including intimate journals for much of his life, were discovered. These provide a huge insight into the life and thoughts of the man. They were sold an American collector and have since passed to Yale University, which has published many of his journals and correspondence. These detailed and frank journals include voluminous notes on the Grand Tour of Europe that he took as a young man and, subsequently, of his tour of Scotland with Johnson.

All content from Kiddle encyclopedia articles (including the article images and facts) can be freely used under Attribution-ShareAlike license, unless stated otherwise. Cite this article:
James Boswell Facts for Kids. Kiddle Encyclopedia.