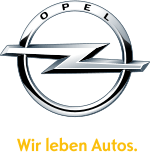 Opel, full name Adam Opel AG, is an automobile maker from Germany, founded in 1862. Since 1929, Opel is the German brand of the American automaker General Motors. Opel has about 35,000 workers. The company headquarters are in Rüsselsheim, Germany. Other German plants are in Eisenach and Kaiserslautern. In Great Britain, Opel cars are called Vauxhall. Opel would later engineer cars for GMDAT, and still engineers them for GM Korea. From 2007-2009 three Opel models (the Antara, the Astra and the Vectra) were sold in the United States under the Saturn marque. Upon the discontinuation of Saturn Buick became responsible for importing the Opel models. The only Buick cars to not be Opels are the Enclave CUV and the full sized LaCrosse sedan.

The following tables list current and announced Opel production vehicles as of 2017:

Opel produces high-performance derivatives of their cars developed by OPC.

All content from Kiddle encyclopedia articles (including the article images and facts) can be freely used under Attribution-ShareAlike license, unless stated otherwise. Cite this article:
Opel Facts for Kids. Kiddle Encyclopedia.