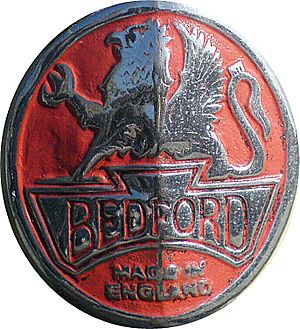 The crest from an old Bedford ambulance

Bedford Vehicles, usually shortened to just Bedford, was a brand of vehicle produced by Vauxhall Motors. It was ultimately owned by General Motors (GM). The brand was established in 1930 and built commercial vehicles. Bedford Vehicles was a leading international lorry brand. It had substantial export sales of light, medium, and heavy lorries throughout the world. It was GM Europe's most profitable venture for several years.

All content from Kiddle encyclopedia articles (including the article images and facts) can be freely used under Attribution-ShareAlike license, unless stated otherwise. Cite this article:
Bedford Vehicles Facts for Kids. Kiddle Encyclopedia.