Amberley Museum is an open-air industrial heritage museum at Amberley, near Arundel in West Sussex, England. The museum is owned and operated by Amberley Museum and Heritage Centre, a not-for-profit company and registered charity, and has the support of an active Friends organisation. The items in the Museums collection are held by The Amberley Museum Trust

The museum was founded in 1978 by the Southern Industrial History Centre Trust and has previously been known as the Amberley Working Museum, Amberley Chalk Pits Museum, and Amberley Museum and Heritage Centre. It is located within historic chalk quarries. Chalk was extracted and processed for lime on site for more than 100 years, and the museum still houses a number of its original lime kilns. In addition, holdings and exhibitions at the museum cover a diversity of industrial and local heritage collections, including narrow gauge railways, local bus services, and a multitude of light and rural industrial subjects.

The open-air museum is 36-acre (146,000 m2), located next to Amberley railway station and dedicated to the industrial heritage of South East England and with a special interest in aspects of the history of communications and transport.

The museum is sited in a former chalk quarry where the chalk was converted into lime for use in mortar and cement, and remaining on site are several kilns, including a De Witt set, and associated buildings including offices, bagging shed and locomotive shed.

Also to be seen is the quarry tunnel, which appeared as Mainstrike Mine in the James Bond film A View to a Kill. Additional buildings have been relocated or replicated on the site and exhibition halls added. The natural history and geology of the site can be seen from a nature trail. 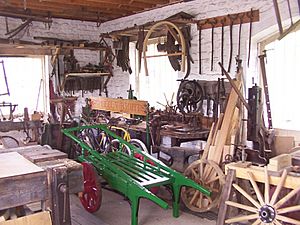 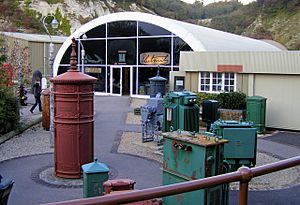 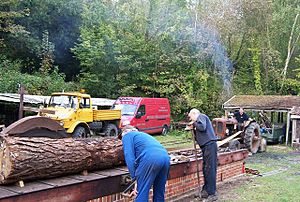 Sawing Logs at the timber yard

The site hosts a range and exhibitions and collections not all of which are opened every day.

Crafts demonstrated on site include woodturning, broom-making, walking stick-making and the work of the blacksmith and potters. Special events are held regularly. 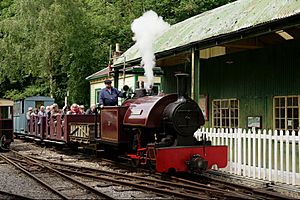 The Amberley Museum Railway is a 2 ft (610 mm) narrow gauge railway and railway exhibition hall devoted to British industrial narrow gauge railways. There are 45 locomotives, with 8 being steam powered, 29 internal combustion and 4 battery electric, and around 80 items of rolling stock, chiefly goods wagons, based largely on the collection of the former Brockham Museum (relocated here in 1982). There is special interest in railway material from the Dorking Greystone Lime Company and also from the Groudle Glen Railway in the Isle of Man. Of the 8 steam locos, two are currently operational. 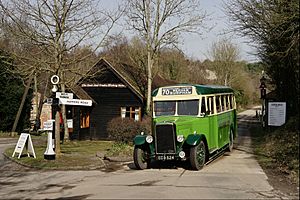 The collection completed by a reconstructed 1920s Southdown Bus garage. The depot houses working buses chiefly from the local operator Southdown Motor Services based on the collection of the Southdown Omnibus Trust

On open days the Southdown Bus collection operates bus rides throughout the day. The collection of vehicles is listed below.