Petersfield is a market town and civil parish in the East Hampshire district of Hampshire, England. It is 15 miles (24 km) north of Portsmouth. The town has its own railway station on the Portsmouth Direct line, the mainline rail link connecting Portsmouth and London. Situated below the northern slopes of the South Downs, Petersfield lies wholly within the South Downs National Park.

The town is on the crossroads of well-used north–south (formerly the A3 road which now bypasses the town) and east–west routes (today the A272 road) and it grew as a coach stop on the Portsmouth to London route. Petersfield is twinned with Barentin in France, and Warendorf in Germany.

Petersfield Heath's burial mounds may be up to 4,000 years old; their distribution is mainly to the east and south east of the Heath. These are considered to be one of the more important lowland barrow groups in this country. The barrows indicate that the area of the Heath was occupied by people who may have come to regard this area as sacred to their religion. As yet no trace has been confirmed for the dwellings of these people as the structures would have been wooden but Petersfield Museum hosts a community project to throw more light on this period of history. 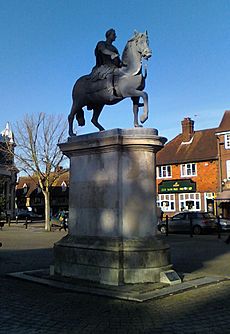 The statue of King William III in the The Square

The town was founded during the 12th century by William Fitz Robert, 2nd Earl of Gloucester, later chartered by his widow, Hawise de Beaumont, and confirmed by charter in 1198 from "John, Count of Mortain" (later to be King John). In 1415 King Henry V granted the burgesses of Petersfield freedom from toll, stallage, picage, pannage, murage, and pontage throughout the realm of England. All charters are preserved in the archive files at Petersfield Town Council.

The town grew in prosperity due to its position on frequently travelled routes, local sheep farming, and cottage industries including leather and cloth. There were weekly markets in the town square for sheep, horse and cattle trading, and two annual fairs, in June (on the feast of St Peter and St Paul) and November (on the feast of St Andrew). An autumn fair which began in the early 19th century was held in October on The Heath, called "The Taro Fair".

The town's market square has an 18th-century statue of King William III (of Orange) by Henry Cheere. The king is mounted and the statue is on an engraved plinth. It is one of only five statues of William in the United Kingdom outside Northern Ireland (the others being in Glasgow, Brixham, Hull and Bristol) and, as such, attracts bands of marching Orangemen in mid-July to commemorate William's victory at the Battle of the Boyne.

Petersfield is situated in the valley of the Western Rother, on the Lower Greensand at the northern edge of the South Downs. The town lies at the western end of the Greensand Ridge, a sandstone ridge running through Hampshire, Surrey and Kent.

The town is surrounded on all sides by farmed countryside, with the South Downs south of the town, the Hampshire Downs to the west, and forested hills (Durford Wood) to the north east.

The town is a centre for exploring the South Downs National Park. 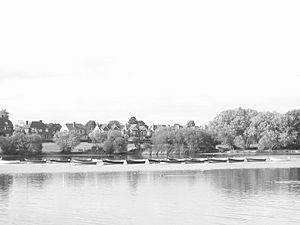 Close to the town and situated on the South Downs is Queen Elizabeth Country Park, which incorporates Butser Hill (270 metres), and has a variety of scenery including chalk hills, beech woodland and pine forest. The Hangers Way footpath starts from the country park, goes to Buriton, through Petersfield and on to Alton.

On the south east side of the town is Petersfield Heath, 95 acres (38 ha) of heathland including woodland, grassland, a pond, and a picnic and recreation area. Petersfield Heath is a Site of Nature Conservation Interest (SNCI). It also contains 21 Bronze Age barrows which have resulted in the site being given Scheduled Ancient Monument status.

Heathland is very rare throughout Europe and Petersfield Heath is a typical heathland mosaic of micro habitats. Across the site are sandy heath and acid heath areas, grassland and scrub which gives the area diverse zones for insects, reptiles, birds and small mammals.

Petersfield Heath is at one end of "The Serpent Trail", a 65-mile (105 km) walk though heath and downland of Hampshire and West Sussex to Haslemere.

On the nearest week-end to 6 October every year the Taro Fair is held on Petersfield Heath, a reminder of cattle fairs that were held annually until the 1950s. It is now a fun fair. ("Tarw" is the Welsh shout by the herders for "Bull"; pronounced "Taro" in English).

In the High Street is the physic garden, which is a recreation of a 17th-century herb garden. It is open to the public nearly every day of the year. Next to the Red Lion public house is the small Charles Dickens garden.

Petersfield has a small volunteer run community garden, 'The Good Life (Petersfield) Community Garden', situated on the edge of the town next to Sheet railway crossing; the garden is open to members (membership is free). 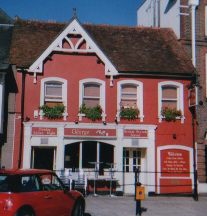 The George café in The Square in the middle of Petersfield

In 2015 Petersfield had several public houses and bars. Petersfield had one nightclub, Vertigo (originally known as Oscars when it first opened in the early 1990s). This was housed in the old Savoy cinema, a 1930s building used as a cinema until its closure in 1985. In May 2007, Vertigo nightclub was closed for good and sold to a developer to make way for a restaurant/bar with 14 flats above.

Petersfield's Festival Hall shows plays and concerts during the year.

Petersfield Youth Theatre was formed in 1990 and performs annually at the Festival Hall, as well as delivering projects throughout the year.

Petersfield has two museums, both run by the Petersfield Museum Trust. The Flora Twort Gallery, based in her old studio, displays the Bedales Historic costume collection, which consists of over 1,000 pieces dating from 1720. The gallery exhibits a small part of this collection, which is changed annually, along with examples of art by Flora Twort. Petersfield Museum exhibits social-history collections made up from maps, photographs, archives, oral history and artefacts related to the history of the town and is situated in the town's old courthouse. Exhibitions are sometimes also held at the Festival Hall, St Peter's Church, and the Physic Garden.

Petersfield was once home to the world's first Teddy Bear Museum, which opened in 1984. It closed at the end of 2006, and is now a private house.

The King's Arms is the local youth club situated near the town centre, run by Petersfield Area Churches Together (PACT), a charitable Christian organisation. 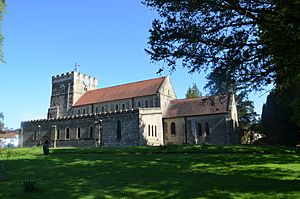 The parish church of St Peter, after which the town is named, is the Anglican church of Norman origins in the town centre, The Square. Other churches include Methodist (Station Road), Catholic (St Laurence's, Station Road) and United Reformed Church (College Street).

The Evangelical fellowship meets at the Herne Farm Leisure Centre on the eponymous estate, the Religious Society of Friends in the Voluntary Centre, High Street, the Salvation Army in Swan Street and Life Church Petersfield, formerly Petersfield Christian Fellowship, is in Station Road. 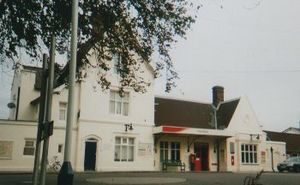 Petersfield railway station is on the Portsmouth Direct Line between London and Portsmouth. A branch line to Midhurst closed in 1955. The main station buildings date from the opening of the line in 1859 and are of a "town" type.

Petersfield stood at a major crossroads until the A3 London to Portsmouth road was bypassed to the west of the town. The A272 bypasses the town via the A3 and a link road to Sheet on its route between Winchester, Hampshire's county town, and Heathfield, East Sussex.

Petersfield is twinned with:

Sports venues include the Taro Centre, a leisure centre containing swimming pools, squash courts, gymnasium and other facilities. The town has tennis courts (both public and members only), an open-air pool, a number of playing fields and a golf club. Petersfield has clubs and teams for sports. Petersfield Town F.C. plays in the Wessex League. Several players have gone on to professional sporting careers, such as footballer Maik Taylor, rugby player Tim Rodber and more recently Calum Chambers who plays for Aston Villa and has been called up for England as well. The town has a Triathlon Club.

Petersfield has cycling groups including a local CTC group and The Petersfield Mountain Bikers. 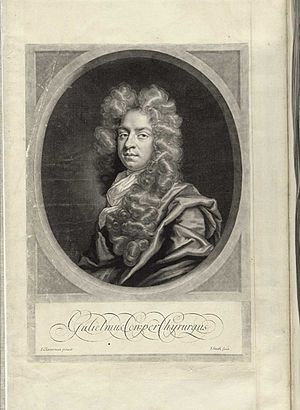 Children's author Michelle Magorian lives in Petersfield. Author Ursula Moray Williams (1911–2006) was born there and John Wyndham (1903–1969), who wrote Day of the Triffids, lived in the town.

Vice Admiral Sir Stuart Bonham Carter (1972) and Sir Percy Wyn-Harris, mountaineer and Governor of The Gambia (1979) died in Petersfield. Victoria Cross holder Commander Loftus William Jones, killed at the Battle of Jutland, was born in Petersfield. From the citation:

Commander Jones was hit by a shell, which took off his leg above the knee, but he continued to give orders to his gun's crew, while a Chief Stoker improvised a tourniquet round his thigh. Noticing that the Ensign was not properly hoisted, he gave orders for another to be hoisted.

In the sporting world, John Small, shopkeeper, cobbler, and Hambledon cricketer is buried in the churchyard of St Peter's. Footballer Calum Chambers was born in Petersfield in 1995. John Westwood, a notable football fan, lives in the town and is a partner in Petersfield Bookshop, which has two Royal Warrants and celebrated its centenary in 2018. Erica Roe, known for streaking at Twickenham in 1982, was working at the bookshop at the time.

All content from Kiddle encyclopedia articles (including the article images and facts) can be freely used under Attribution-ShareAlike license, unless stated otherwise. Cite this article:
Petersfield Facts for Kids. Kiddle Encyclopedia.