Alton is a market town and civil parish in the East Hampshire district of Hampshire, England. It is located across a valley on the source of the River Wey. According to the 2011 census, it has a population of 17,816. The town is famous for its connection with Sweet Fanny Adams.

The town was recorded in the Domesday Survey of 1086 under the name Aoltone and was notable for having the most valuable market recorded therein. The Battle of Alton occurred in the town during the English Civil War. The town contains three secondary schools and its own railway station. 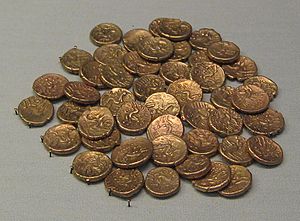 The Alton Hoard of Iron Age coins and jewellery was found in the vicinity of the town in 1996 and is now in the British Museum. A Roman road ran from Chichester to Silchester and there is evidence of a Roman posting station at Neatham near Alton, probably called Vindomis, and a ford across the River Wey. Centuries later, an Anglo-Saxon settlement was established in the area and a large 7th century cemetery has been discovered during building excavations. It contained a selection of grave goods which included the Alton Buckle which is on display in the Curtis Museum, and is considered to be the finest piece of Anglo Saxon craftsmanship found in Hampshire. The buckle was found in the grave of a warrior, and has a silver-gilt body, set with garnets and glass.

The River Wey has a source in the town, and the name Alton comes from an Anglo-Saxon word "aewielltun" meaning "farmstead at the source of the river".

In 1001 Danish forces invaded England during the First Battle of Alton. When they reached Alton, the forces of Wessex came together and fought against them. About 81 Englishman were killed, including Ethelwerd the King's high-steward, Leofric of Whitchurch, Leofwin the King's high-steward, Wulfhere a bishop's thane, and Godwin of Worthy, Bishop Elfsy's son. Danish casualties were higher, but the Danes won the battle and fleeing Englishmen took refuge in Winchester.

Alton is listed as having the most valuable recorded market in the Domesday Book under the name Aoltone in the 'Odingeton Hundred — Hantescire'. 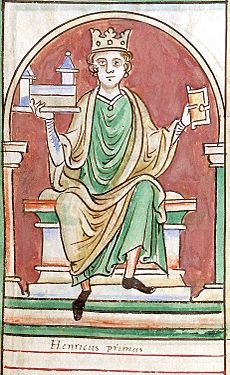 The Treaty of Alton was an agreement signed in 1101 between William the Conqueror's eldest son Robert, Duke of Normandy and his brother Henry I of England. Henry had seized the throne while his elder brother was away on the first crusade. Robert returned to claim the throne, landing in Portsmouth. The two brothers met in Alton and agreed terms which formed the Treaty of Alton. Part of the main street through Alton is called Normandy Street, probably reflecting this event.

The first recorded market in Alton was in 1232, although the market at Neatham first recorded in the Domesday Book may also have been in the town. Blome wrote in 1673 of a 'market on Saturdays, which is very great for provisions, where also are sold good store of living cattle'. The Saturday market is featured on Kitchin's map of Hampshire (1751) which marks the town as Alton Mt. Sat.

1307 was, in fact, the first year of Edward II’s reign but Edmund of Woodstock was not lord of the manor then. According to the Victoria County History (written after Curtis’ book):-

‘In 1273 Edward I granted the manor [of Alton Westbrook] to his mother, Queen Eleanor, who died in 1291, when it reverted to the Crown and was granted in 1299 as dower to his second wife, Margaret of France. On the death of Queen Margaret in 1317, it again came to the Crown, and Edward II gave it in 1319 to his brother Edmund of Woodstock, Earl of Kent.’

As can be seen, Queen Margaret held the manor until 1317 and so the fair could not have been granted to Edmund of Woodstock in 1307.

The correct date for the grant seems to be 22 November 1320 (according to the Charter Rolls, 14 Edward II, no.15). The grant was for a 9-day fair - the vigil [eve] and feast of Whitsuntide and seven days after.

The two main manors in Alton - Alton Eastbrook and Alton Westbrook - had a fair each. That of Alton Eastbrook has no extant charter, and may never have had one. It was originally held on St Lawrence’s Day and so its origin was, presumably, the patronal festival. The religious aspect would have ceased when the country was no longer Roman Catholic. This fair seems to have been held on Crown Close (which is in the manor of Alton Eastbrook) in the early 19th century. When this land was built upon, the fair moved and was held where ever the Westbrook fair was - the Market Place, various meadows and the Butts.

The date of the Eastbrook fair was changed to Michaelmas in the mid-18th century as it came during harvest time and the farmers were not satisfied. Some accounts for this fair in the early 18th century do survive and show that there was a cheese fair as well the usual mix of travelling and local people with stalls and stands - people selling lace, gloves, books, gingerbread, bodices, sugar plums, toys, soap and knives, to name but a few. By the late 19th century, this fair was said to be mainly for horses, sheep and, occasionally, hops. Alton still has an annual fair, but it now takes the form of a carnival. 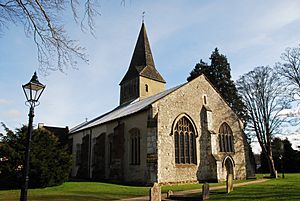 Church of St Lawrence. During the battle, many Parliamentary troops forced their way in through the west door (right), now walled up.

A battle was fought in Alton during the English Civil War. A small Royalist force was quartered in the town when on 13 December 1643 they were surprised by a Parliamentary army of around 5,000 men. The Royalist cavalry fled, leaving Sir Richard Bolle (or Boles) and his infantry to fight. Outnumbered, the Royalists were forced into the Church of St Lawrence, where Bolle was killed along with many of his men. Over 700 Royalist soldiers were captured and bullet holes from the battle are still visible in the church today. 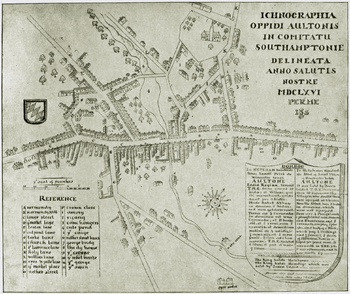 In 1665, Alton suffered an outbreak of bubonic plague, but soon recovered.

The nearby village of Bentworth is the highest village in Hampshire.

Along with the rest of South East England, Alton has a temperate climate which is generally warmer than the rest of the country. The annual mean temperature is approximately 9 °C (48.2 °F) and shows a seasonal and a diurnal variation. January is the coldest month with mean minimum temperatures between 0.5 °C (32.9 °F) and 2 °C (35.6 °F). June and July are the warmest months in the area with average daily maximum around 25.5 °C (77.9 °F).

Alton WordFest is a celebration of the spoken and written word held in late September or early October each year. The festival includes writing competitions for children and adults, a children's spelling bee, a literary lunch, book launches and talks by authors and workshops. Since 2010, Alton WordFest has hosted The Pint Pot of Fire - a story-telling competition among champions representing writers' circles, public speaking groups and oral-tradition story-telling clubs from around the area. The Pint Pot of Fire has run annually since 2005 and was formerly held in Guildford (2005) and Farnham (2006–2009).

The Allen Gallery serves as Alton's art gallery. It houses a large, permanent ceramics collection as well as temporary exhibitions.

Holybourne Theatre is on the site of a former Nissen hut that was converted into a theatre by German prisoners-of-war during World War II. Plays have been performed there since 1950, but the official opening was not until 1971.

Alton Morris was formed in 1979, and have been Morris Dancing both in the United Kingdom and abroad. They often perform at Alton street events.

Local choirs include Alton Amateur Operatic and Dramatic Society, established in 1921, who perform two musical shows and one play each year in a wide variety of musical and dramatic styles. Alton Community Choir sings unaccompanied Hampshire folk songs as well as some African, gospel, blues and calypso music. 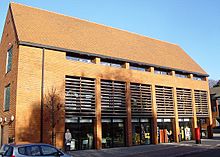 The Alton Independent Cinema Project was formed in May 2011 to help secure the future of independent cinema in the town.

Alton Maltings was renovated in 2004-5 and is now the home of Harvest Church and is used by community groups, charities, private users and other organisations throughout the week. The Alton Maltings claims to be the widest wooden spanned building in Hampshire.

Alton Library was rebuilt in 2005 to a design by the County Council Architects. The new library contains a lending library, reference library, computer facilities and a cafe.

Alton Sports Centre is open to the public and includes a swimming pool, gym, indoor and outdoor courts.

The Town Gardens contains a bandstand (built in 1935 for the Silver Jubilee of King George V), a children's playground, flower beds, trees and shrubs (4.5 acres (18,000 m2)). The bandstand was replaced in 2013 to commemorate Elizabeth II's Diamond Jubilee.

Anstey Park, is a large open space with playing fields and a small children's playground (32 acres (130,000 m2)); the park is home to the town's rugby club. King's Pond, with parking, a surfaced path all round, ducks and swans (11 acres (45,000 m2)) The Butts, 2 acres (8,100 m2) of common land now used for visiting circuses and fairs, and used in medieval and Tudor times for the weekly archery practice which all men were legally required to do (see archery butts) Flood meadows, about 15 acres (61,000 m2), lie close to the source of the River Wey through which rivulets weave and public footpaths give access through the diverse plant and animal life A Tourist Information Centre is in Cross and Pillory Lane (near Market Square in the centre of the town). Alton has 5 allotments: Borovere, Hawthorn, Spitalfields, Wooteys and Whitedown.

Alton station is on the National Rail network at the end of the Alton Line with a service to London Waterloo. 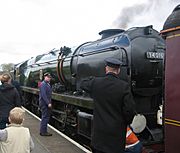 Alton railway station also serves as a terminus for the Mid Hants Railway commonly called 'The Watercress Line', a restored steam railway running between Alton and New Alresford, so called because it used to be used to transport fresh watercress to London.

The origins of the Watercress Line date back to 1861, the year in which Parliament granted consent for what was then known as the 'Alton, Alresford and Winchester Railway'. Four years later the Mid Hants Railway opened, and the train service continued until the line was closed in 1973. Then in 1977 the line was partially re-opened, in 1983 it was extended further, and in 1985 it was re-opened as far as Alton to connect with the mainline London service.

In 2015 some passenger buses in the Alton area were operated by Stagecoach.

Alton is twinned with:

All content from Kiddle encyclopedia articles (including the article images and facts) can be freely used under Attribution-ShareAlike license, unless stated otherwise. Cite this article:
Alton, Hampshire Facts for Kids. Kiddle Encyclopedia.