Chawton is a village and civil parish in the East Hampshire district of Hampshire, England. The village lies within the South Downs National Park and is famous as the home of Jane Austen for the last eight years of her life.

Chawton's recorded history begins in the Domesday survey of 1086. In the 13th century, there was a royal manor house. The owner, John St John, served as deputy to Edward I in Scotland. Henry III visited the manor on over forty occasions. The descendants of John Knight, who built the present Chawton House at the time of the Armada (1588), added to it and modified the landscape in ways that reflect changes in politics, religion and taste. One of those descendants was Elizabeth Knight, whose progresses were marked by the ringing of church bells and whose two husbands both had to adopt her surname. Later in the 18th century, Jane Austen's brother Edward Austen Knight (who had been adopted by the Knights) succeeded, and in 1809 was able to move his mother and sisters to a cottage in the village.

"Chawton Cottage", Jane Austen's house and garden are open to the public.

Chawton House, the 400-year-old grade ll* listed Elizabethan manor house that once belonged to Jane Austen's brother and 275 acres (1.11 km2) of land, has been restored as part of a major international project to establish the new Centre for the Study of Early Women's Writing, 1600–1830. It houses a collection of over 9,000 volumes, together with some related manuscripts. Visitors can see the relationship between the library, the house, the estate and a working farm of the 18th and early 19th centuries.

In 1992 a 125-year lease on the house was purchased for £1.25 million by a foundation established by Sandra Lerner, co-founder of Cisco Systems. 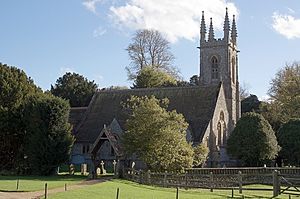 Chawton has a single church, St Nicholas. A church has stood on the site in Chawton since at least 1270 when it was mentioned in a diocesan document. The church suffered a disastrous fire in 1871 which destroyed all but the chancel. The rebuilt church was designed by Sir Arthur Blomfield and is now listed Grade 2*.

The churchyard was reserved for burial for the Knight family, and the graves include that of Jane Austen's mother and sister, both called Cassandra.

Chawton C of E Primary School is the only school in Chawton. It is within the Diocese of Winchester and accepts children from ages four to eleven, and has close ties with St Nicholas's church. There has been a school on the site since about 1840, and the site sits opposite the village green and cricket field.

There are no shops in Chawton. On Winchester Road, which runs through the village, there is a tea shop opposite Jane Austen's house called Cassandra's Cup, which is named after Jane Austen's sister. Just down the road from this is a Fuller's pub called The Greyfriar which has an oak beamed traditional bar, a secluded beer garden and a large car park. Also on Winchester Road is the Village Hall.

Adjacent to Gosport Road lies a green containing a cricket pitch and the home of Chawton Cricket Club, a newly refurbished playground and a set of allotments.

Chawton has two road exits, one leading to a roundabout connected to the A31 and the A32, and the other to the A339/B3006 Selborne Road.

The nearest railway station is 1.7 miles (2.7 km) northeast of the village, at Alton.

All content from Kiddle encyclopedia articles (including the article images and facts) can be freely used under Attribution-ShareAlike license, unless stated otherwise. Cite this article:
Chawton Facts for Kids. Kiddle Encyclopedia.