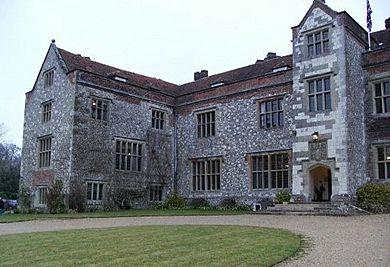 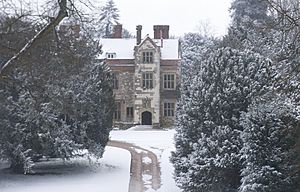 Chawton House is a grade ll* listed Elizabethan manor house in Hampshire. It is run as a historic property and also houses the research library of The Centre for the Study of Early Women's Writing, 1600–1830, using the building's connection with the English novelist Jane Austen.

Chawton House, just outside the village of that name, used to be the home of the writer's brother, Edward Austen Knight. It remained a private family home into the late twentieth century. At the turn of the millennium it was purchased by a charitable trust, extensively restored, and re-opened as a research centre. The Centre, which runs study programmes in association with the nearby University of Southampton, incorporates a significant library, a collection of over 9000 books and related manuscripts. The house is now open to visitors, as well as library readers, for tours and during public events.

It is set in 275 acres (1.11 km2) of Hampshire countryside, and is used for conferences, filming and more recently as a venue for weddings. The present Chawton House was built in 1580, principally by John Knight. Based on a manor house owned by the Knight family since 1551, it was subsequently extended and altered about 1655 and again in the 18th and 19th centuries. The house is built of flint with stone dressings and a tiled roof. The 17th-century south front has two storeys with an attic and three gables.

John Knight served as MP for Lymington from 1593 to 1597 and High Sheriff of Hampshire for 1609–10. The house passed down in the family until the male line failed with the death of Sir Richard Knight, after which it was devised to a relative by marriage, Richard Martin, who thereupon changed his name to Knight. It then passed to Thomas Brodnax, a relative, who did the same. His son, Thomas Knight, died childless and bequeathed the house to his distant relative Edward Austen, the elder brother of Jane Austen, who also added Knight to his name. It then descended in that last Knight family until inherited in poor condition by Richard Knight in 1987, who sold it in 1992.

In 1992 a 125-year lease on the house was purchased for £1.25 million by a foundation established by Sandra Lerner and Leonard Bosack, co-founders of Cisco Systems.

Opened in 2003, it has a collection of over 9,000 books together with related original manuscripts. The Library works in partnership with the University of Southampton, and provides an important resource for the university's MA in 18th Century Study.

In 2015 the house opened to visitors (not only scholars). In 2016 Lerner resigned from the board and her foundation has since directed its funds to other projects.

Chawton House Library is an independent research library and study centre which focuses on women's writing in English from 1600 to 1830. The library's main aim is to promote and facilitate study in the field of early women's writing.

Below is a list of some of the female authors whose works are to be found at the Library. The full on-line catalogue is searchable, and can be accessed via the Chawton House website.

The Novels Online project makes freely accessible the full-text transcripts of some of the rarest works in the Chawton House Library collection. These texts explore broad-ranging themes as satire, slavery, marriage, witchcraft and piracy. In bringing these little-known novels to a wider audience, it is hoped to stimulate interest in these works amongst a new generation of readers. The texts are completely unedited, and have been copied from the originals as accurately as possible. Even printer errors have been retained. This is an ongoing project with more novels and texts being made available online.

The gardens are open to the public, with access to a tearoom. The restoration programme for the gardens was extensive, and focused in particular on the restoration of the walled garden. Edward Knight had the idea to build a new walled garden during Jane Austen's lifetime. In 1813, she wrote to her brother Frank, "He [Knight] talks of making a new Garden; the present is a bad one & ill situated, near Mr Papillon's; — he means to have the new, at the top of the Lawn behind his own house." Knight's original walls are mostly still intact, but the glasshouses and potting sheds, had to be rebuilt. The gardens have been restored using Edward Austen Knight's original planting scheme. The central space is used for the production of vegetables, soft fruits, herbs and flowers. Chawton House is registered with the Soil Association, and is now certified as an organic producer. Everything grown in the walled garden is for use by the Library, with any surplus being sold locally in aid of the charity.

The park and gardens of Chawton House are Grade II listed on the Register of Historic Parks and Gardens.

Chawton house is situated about 400m away from the cottage where Austen lived for the last eight years of her life. This now houses the Jane Austen's House Museum, which is a large 17th-century house in the centre of the village of Chawton, owned by the Jane Austen Memorial Trust since 1947 and preserved in her memory. The two houses, Chawton House and Jane Austen's House, are entirely separately run charities.

Austen is known to have been a frequent visitor to what she knew as the 'Great House', and she references it a number of times in her letters. Edward Austen also loaned it to his brother, Francis Austen. Edward Austen himself resided at Godmersham Park, but his son, Edward Knight II, moved to Chawton House following his marriage, and sold Godmersham Park following his father's death. 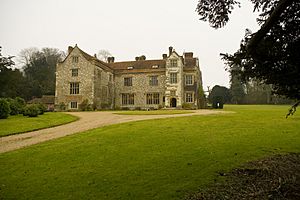 Chawton House from the driveway

Chawton House & Gardens is open to the public seven days a week, including bank holidays. Members of the public can tour the house and gardens. Opening times in 2018 are:

These hours apply until 7 December 2018, when the house closes for the winter. Updated opening times and ticket prices can be found on the Chawton House website. Group tours are available by contacting the Library directly.

Access to the Library itself is available, free of charge, to members of the public who would like to use the library collections. First-time visitors will need to provide identification. All visits to the library are by appointment only. The library opening hours are:

Events are held regularly at the library, covering a range of topics relating to the House and Gardens, and material held by the Library; these include:

The Library also offers educational visits to schools, colleges and universities allowing the chance for teachers and students to engage with a variety of themes within a working, historic building. Both a formal programme of sessions and a bespoke service, to study specific areas in more detail, can be provided.

All content from Kiddle encyclopedia articles (including the article images and facts) can be freely used under Attribution-ShareAlike license, unless stated otherwise. Cite this article:
Chawton House Facts for Kids. Kiddle Encyclopedia.