Cassandra Elizabeth Austen (9 January 1773 – 22 March 1845) was the older sister of Jane Austen. She was Jane's best friend and a beauty. Her fiancé died; she never married.

Austen was born in 1773 in Steventon, Hampshire. Her father was the Rev. George Austen (1731–1805), and her mother was Cassandra, née Leigh (1739–1827). There were 8 Austen children. As Cassandra and Jane were the only girls they kept up an especially close friendship through their entire lives. Over 100 letters addressed to Cassandra from Jane are still kept. These letters have helped historians to find out more details about the life of Jane Austen. When Cassandra went to school, Jane followed her. At first it was arranged that Jane was not to go, as she was considered to be too young for schooling. However, she ended up going with Cassandra. In their mother's words, "if Cassandra's head had been going to be cut off, Jane would have hers cut off too". 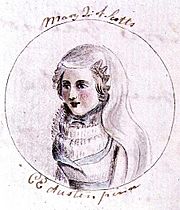 Cassandra Austen's drawing of Mary, Queen of Scots, from her sister Jane's manuscript The History of England.

When Jane died in 1817, Austen is reported to have destroyed many of her letters, most of them dated after 1795. Austen herself lived alone until her death on 22 March 1845, aged 72. She was buried at St. Nicholas' Church in Chawton, Hampshire.

All content from Kiddle encyclopedia articles (including the article images and facts) can be freely used under Attribution-ShareAlike license, unless stated otherwise. Cite this article:
Cassandra Austen Facts for Kids. Kiddle Encyclopedia.