Kids Encyclopedia Facts
This page is about the town in England. For the Adelaide Hills township, see Littlehampton, South Australia.

Littlehampton is a town, seaside resort and pleasure harbour, and the most populous civil parish in the Arun District of West Sussex, England. It lies on the English Channel on the eastern bank of the mouth of the River Arun. It is 51.5 miles (83 km) south south-west of London, 19 miles (31 km) west of Brighton and 10 miles (16 km) east of the county town of Chichester.

The parish covers an area of 11.35 km2 (4 sq mi). The suburban area of the town has a population of approximately 55,000. The conurbation includes other settlements: Wick in the north west; Lyminster to the north; and Rustington to the east. Wick and Toddington, which has a large business park, became part of the town in 1901. Nearby towns include Bognor Regis (WSW) and Worthing to the east.

The town is also the westernmost settlement of the 15th largest urban area in England and Wales, the Brighton/Worthing/Littlehampton conurbation, a region encompassing 474,485 people (2011 census). The South Downs National Park commences 3 miles (4.8 km) north of the town: Littlehampton links to Amberley and Arundel by footpaths and railway as well as by roads.

A human settlement at Littlehampton can be traced back to prehistoric and Roman times, while it appears in the Domesday Book of 1086 as the small hamlet of 'Hantone'. The settlement is believed to have been a fishing community around this time, appearing on a French map in around 1100 as 'Hanton'. The settlement is then believed to have been given to the Abbey of St Martin de Seez in Normandy, who owned Littlehampton until around 1400. The area then passed back to the ownership of successive Earls of Arundel and Dukes of Norfolk, whose successors still reside in Arundel today.

Littlehampton began to develop as a port as a result of constant silting of the River Arun, perhaps leading to the prefix of 'Little' being added to 'Hampton', in order to distinguish it from the larger Southampton further along the coast. The expansion of port activities led to a new river mouth being cut in 1735, alongside the building of a wooden harbour. At this time it was also known as Arundel Port.

As the eighteenth century progressed, the town developed from a fishing community to a holiday destination, with Lord Byron, Samuel Taylor Coleridge, Percy Bysshe Shelley and John Constable all believed to have spent time there.

The town's status as both a port and a holiday resort led to economic success in the nineteenth century, with a railway line and a cross-channel ferry to Honfleur in France being introduced. The population of the town grew tenfold over the century, from 584 in 1801 to 5,954 in 1901. Littlehampton remained as a holiday resort in the twentieth century, becoming known as 'The Children's Paradise' in the 1920s.

Post-war Littlehampton saw large-scale house building on the outskirts of the town, eventually absorbing the surrounding villages of Wick, Lyminster and Toddington, while the commercial element of the town became increasingly focused on boat building and water sports.

In 1967, the town attracted attention by becoming the base for the first ever Blue Peter lifeboat. 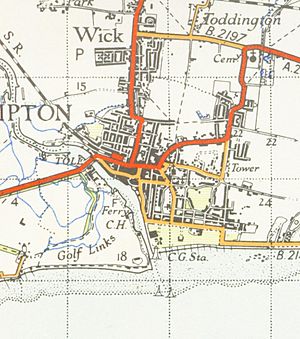 A map of Littlehampton from 1946

Littlehampton is on the A259, though this bypasses most of the town. Littlehampton is connected to the A27 south coast trunk road by the A284, which also provides the main north–south route out of the town and links to the A29 and A24. The A27 also later links with the M27. The A280 also links Littlehampton to the A24 and is a main route from the north-east.

The Littlehampton Ferry, is a ferry linking the east and west parts of the River Arun together. The Ferry operates from 31 March to 30 September between 10 am and 5 pm, although has been closed in recent years due to the ongoing Covid-19 pandemic. The Ferry Company also provide harbour tours on the hour.

Littlehampton has a number of bus routes operated by Compass Travel and Stagecoach South. The bus station at Littlehampton handles anything up to 1,000 passengers a day and over 2 buses.

Littlehampton also has a small number of taxis, with taxi ranks all over the town and four different taxi companies.

Littlehampton's port is based around the River Arun, which opens onto the English Channel. A small stretch of this, 5 miles out to sea and 6 miles wide, is locally known as the "Littlehampton Channel". Littlehampton started as a fishing port but now is a thriving port for thousands of leisure craft which visit from all over the UK and Europe. In 2009, use of leisure craft at Littlehampton rose to the extent that at least 200 more moorings were required. Littlehampton is also a commercial port, handling around 50–60 ships a year from Ireland, the Netherlands, Germany, Belgium and France with cargo including marine aggregates, stone, marble chippings and timber. From the early 1920s David Hillyard built yachts in Littlehampton, and the company of David Hillyard Ltd continued here until 2009 producing a total of over 850 yachts.

Littlehampton supports a range of performance groups including Stagedoor Theatre Company, The Edwin James Festival Choir & Orchestra, The Musical Comedy Society and Players Operatic Society who perform throughout the year. It also holds a popular 'Last Night of the Proms' concert performed annually by the Littlehampton Concert Band. 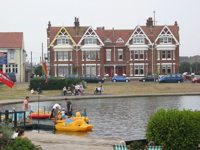 The Windmill Entertainment Centre is a small theatre and single-screen cinema, with a 213-seat auditorium situated on the seafront in Littlehampton.

The flints that make up Littlehampton's West Beach contain quite a few fossils. The flints are formed by silica from sea sponges and diatoms from around 60 to 95 million years ago. Some of the creatures become fossilised and can be seen as patterns on the outside of the flint. These are known locally as Shepherds crowns. The Littlehampton Museum occasionally organises fossil hunting walks during the school holidays.

On 10 June 2012, heavy rain fell on the town and continued into the early hours of 11 June at which point more than 26 homes got flooded along the waterfront, along with multiple flooded roads leading to road closures and many other homes flooded in the town. A rescue centre was set up at the local Leisure Centre for those evacuated during the floods. During the flooding local emergency services received over 150 flood-related calls.

The world headquarters of The Body Shop is situated towards the north of the town, and is a major employer in the area.

A local company, Dando Drilling International Ltd, has been exporting drilling rigs from Littlehampton since 1867. Van Heyningen Brothers (VHB) salad growers was a major employer in the town from 1964 to 2003.

Littlehampton Rugby Club plays in the Sussex Intermediate League, National Level 10, after promotion at the end of the 2010–11 season. Most games are played on Saturday or Sunday afternoon, either at The Littlehampton Academy or in the West/East Sussex area. The club is also involved in the local community, including the carnival, bonfire night, dragon boat racing and other charitable events.

Having been established over 100 years ago, Littlehampton Hockey Club is one of the oldest hockey clubs in England. In 1999 became the first club in the history of Sussex Hockey to win the Sussex Open Premier League while remaining undefeated all season. 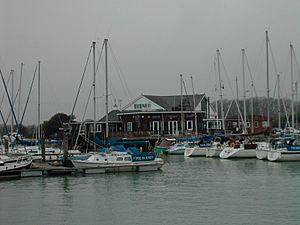 A picture of the building of Arun Yacht Club

For younger children there are five primary schools — Lyminster, River Beach, St. Catherine's, White Meadows and Georgian Gardens. These schools came into existence in 2011 following a major reorganisation of primary school provision in the town, which replaced six separate junior and infant schools with three primary schools. River Beach Primary was formed from the merging of Connaught Junior with Arun Vale and Elm Grove Infants schools, whilst the merger of Flora McDonald Junior and Wickbourne Infants schools brought about the creation of White Meadows. Lyminster existed before the reorganisation as an infant school and has now begun a phased expansion to become a primary school.

All content from Kiddle encyclopedia articles (including the article images and facts) can be freely used under Attribution-ShareAlike license, unless stated otherwise. Cite this article:
Littlehampton Facts for Kids. Kiddle Encyclopedia.