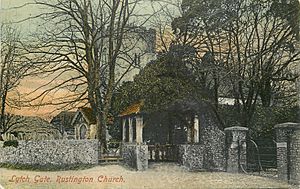 Rustington is a large village and civil parish in the Arun District of West Sussex. Rustington is approximately at the midpoint of the West Sussex coast and midway between the county town of Chichester and Brighton. The A259 runs along the north of Rustington, westward to Littlehampton, Bognor Regis and Chichester, and east to Worthing and Brighton. The area forms part of the Brighton and Hove built-up area.

With a population of over 14,000 in 2014, it has the size and facilities of a small town, including a shopping area with a mix of independent and chain stores. The parish of Rustington includes the neighbourhood of West Preston.

Rustington was in World War I home to an American air base, at the east of the High Street.

Rustington contains a conservation area which extends from the south end of North Lane to The Lamb in The Street. Here, where trees are protected, are the largest number of pre-1850 listed buildings in the post town, with The Street and surrounding roads containing some of the finest 17th and 18th century Sussex flint cottages in West Sussex, some of which are thatched.

There is a village information centre at the Churchill Parade car park. Rustington has its own museum, containing artworks and artefacts and a coffee shop, housed in an 18th-century thatched house recently converted for the purpose.

The local amateur football team, Rustington F.C., went through 2006 without losing a single match, earning them a mention on Sky Sports News on New Year's Eve.

Rustington competes annually in the South-East in Bloom competition. It holds an annual carnival and fête in August. Close to Christmas Eve, Rustington has a village carol concert which is free for local residents and features local school children accompanied by the Littlehampton Concert Band.

Rustington adjoins the English Channel, and ranges between 2 metres and 7 metres above Ordnance Datum. It has three main recreation grounds and neither woodland nor fields.

In music, literature and the media

Rustington is a well-known hymn tune by Hubert Parry who lived and died in Rustington (see Notable People below).

Rustington achieved national fame in 1956 with the launch of Flanders and Swann's show At the Drop of a Hat, in which the Gnu Song contains the lines:

I had taken furnished lodgings down at Rustington-on-Sea
Whence I travelled on to...(Ashton-under-Lyne it was actually)...

Rustington has an amateur football club Rustington F.C. who play at the Recreation Ground.

Rustington shares Angmering railway station with Angmering and East Preston. Trains from this station go to Brighton and Portsmouth/Southampton, and some to London.

Bus services to Brighton and Portsmouth are provided by the 700 Coastliner.

In the Gnu Song, introduced in the 1950s by Michael Flanders and Donald Swann, a verse begins with the line, "I had taken furnished lodgings down at Rustington-on-Sea". This is the setting for an apparition of a gnu.

To celebrate, on 7 September 1996, Neville Duke returned to Rustington to unveil a plaque, marking the event, joined by a Gloster Meteor and a Hawker Hunter, which flew over the sea front.

All content from Kiddle encyclopedia articles (including the article images and facts) can be freely used under Attribution-ShareAlike license, unless stated otherwise. Cite this article:
Rustington Facts for Kids. Kiddle Encyclopedia.