A hot cross bun is a spiced sweet bun usually made with fruit, marked with a cross on the top, and traditionally eaten on Good Friday in the United Kingdom; Ireland; Australia; India; New Zealand; South Africa; and some parts of the Americas, including Canada and the United States.

The bun marks the end of Lent and different parts of the hot cross bun have a certain meaning, including the cross representing the crucifixion of Jesus, and the spices inside signifying the spices used to embalm him at his burial and may also include orange peel to reflect the bitterness of his time on the Cross.

They are now available all year round in some places. Hot cross buns may go on sale in Australia and New Zealand even as early as New Year's Day or after Christmas.

In many historically Christian countries, plain buns made without dairy products (forbidden in Lent until Palm Sunday) are traditionally eaten hot or toasted after midday Good Friday.

The Greeks in 6th century AD may have marked cakes with a cross.

One theory is that the Hot Cross Bun originates from St Albans, in England, where Brother Thomas Rodcliffe, a 14th-century monk at St Albans Abbey, developed a similar recipe called an 'Alban Bun' and distributed the bun to the local poor on Good Friday, starting in 1361.

In the time of Elizabeth I of England (1592), the London Clerk of Markets issued a decree forbidding the sale of hot cross buns and other spiced breads, except at burials, on Good Friday, or at Christmas. The punishment for transgressing the decree was forfeiture of all the forbidden product to the poor. As a result of this decree, hot cross buns at the time were primarily made in domestic kitchens. Further attempts to suppress the sale of these items took place during the reign of James I of England (1603–1625).

The first definite record of hot cross buns comes from a London street cry: "Good Friday comes this month, the old woman runs. With one or two a penny hot cross buns", which appeared in Poor Robin's Almanac for 1733. Food historian Ivan Day states, "The buns were made in London during the 18th century. But when you start looking for records or recipes earlier than that, you hit nothing." 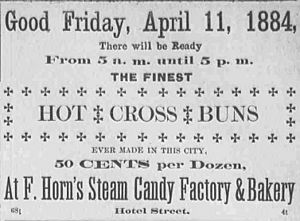 An 1884 advertisement announcing the sale of hot cross buns for Good Friday in a Hawaiian newspaper.

English folklore includes many superstitions surrounding hot cross buns. One of them says that buns baked and served on Good Friday will not spoil or grow mouldy during the subsequent year. Another encourages keeping such a bun for medicinal purposes. A piece of it given to someone ill is said to help them recover.

In the United Kingdom, the major supermarkets produce variations on the traditional recipe such as toffee, orange-cranberry, salted caramel and chocolate, and apple-cinnamon.

In Australia, coffee-flavoured buns are also sold in some bakeries. There are also sticky date and caramel versions, as well as mini versions of the traditional bun. Other newer variations that can be purchased from major supermarkets include choc chip; chocolate and cherry, butterscotch, apple & cinnamon, banana and caramel and white chocolate and raspberry.

The Not Cross Bun is a variation on the traditional hot cross bun. It uses the same ingredients but contains a different marking piped on top of the bun instead of a cross. Sonoma Baking Company in Sydney claims to have produced the first commercially sold Not Cross Bun in Easter 2012, which in Sonoma's case is piped with an 'S'.

In Slovakia and in Czechia, mazanec is a similar cake or sweet bread eaten at Easter. It often has a cross marked on top. 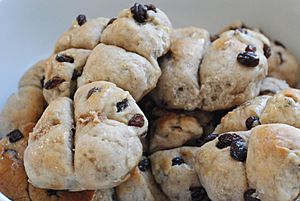 Hot cross buns having the cross made with cuts

The traditional method for making the cross on top of the bun is to use shortcrust pastry, though some 21st century recipes recommended a paste of flour and water.

All content from Kiddle encyclopedia articles (including the article images and facts) can be freely used under Attribution-ShareAlike license, unless stated otherwise. Cite this article:
Hot cross bun Facts for Kids. Kiddle Encyclopedia.