Kids Encyclopedia Facts
Not to be confused with Los Altos Hills, California.

Los Altos is a city at the southern end of the San Francisco Peninsula, in the San Francisco Bay Area. The city is in Santa Clara County, California, United States. The population was 28,976 according to the 2010 census.

Most of the city's growth occurred between 1950 and 1980. Originally an agricultural town with many summer cottages and apricot orchards, Los Altos is now an affluent bedroom community. Los Altos has several distinctive features. Commercial zones are strictly limited to the downtown area and small shopping and office parks lining Foothill Expressway and El Camino Real.

The area was originally called Banks and Braes. Paul Shoup, an executive of the Southern Pacific Railroad, and his colleagues formed the Altos Land Company in 1906 and started the development of Los Altos. The company acquired 140 acres of land from Sarah Winchester. Shoup wanted to link Palo Alto and Los Gatos by making Los Altos a commuter town. It continued a train a day operation to and from San Francisco.

In 1913, the craftsman-style Los Altos train station was built at 288 First Street.

By 1949, many residents were dissatisfied with the zoning policy of Santa Clara county. Also, there was a constant threat of being annexed by neighboring Palo Alto and Mountain View, so they decided to incorporate. Los Altos became the eleventh city in Santa Clara county on December 1, 1952.

In 1976, Steve Jobs and Steve Wozniak, along with others including Ronald Wayne, built the first 50 Apple I's in Jobs's garage in Los Altos. Jobs, Wozniak, and Wayne founded Apple Computer, Inc on 1 April 1976.

Approximately 2,900 people would have considered themselves a resident of Los Altos. 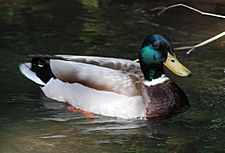 Mallard in May, in Adobe Creek; the creek now runs dry by summer.

Adobe Creek flows through Redwood Grove, a 5.9-acre (2.4 ha) nature preserve off University Avenue in Los Altos purchased by the city in 1974. In October 2009 Los Altos contracted with Acterra to remove non-native plants and revitalize the redwood, oak woodland, riparian and grassland ecosystems by installing native plants, improving soil conditions, and creating habitat for wildlife such as bird houses and native bee boxes. The Coast Redwoods (Sequoia sempervirens) were transplanted by the Halsey family from a location on Summit Road in the Santa Cruz Mountains and replaced the native willows. The historic Halsey House, built in the late 1920s by Theodore and Emma Halsey, is a good example of Spanish Revival architecture. The city designated Halsey House a local landmark in 1981 and until recently it housed the Florence Fava collection of Coastanoan or Ohlone Indian artifacts from a nearby archeological excavation in Los Altos Hills (now moved to the Los Altos History House). On June 16, 2010 the Los Altos City Council finalized the purchase of 10,000 square feet (930 m2) of creekside property from Delbert and Marlene Beumer, who wanted to provide a safe pathway connecting Shoup Park and Redwood Grove.

Steelhead trout (Oncorhynchus mykiss) occurred historically in Adobe Creek. However, tidal gates at the mouth of Adobe Creek as well as culverts at the El Camino Real and Interstate 280 overpasses probably preclude the passage of migrating salmonids, even though the reaches upstream from Hidden Villa have been judged excellent trout habitat.

Los Altos has a variety of youth-oriented sports organizations, programs, and after-school activities. Some examples:

The Los Altos Town Crier, a weekly, is the primary newspaper for the town, "serving the Hometown of Silicon Valley since 1947." The San Jose Mercury News is the primary daily newspaper serving the town, delivering a Peninsula Section to Los Altans and locations north in lieu of the Local section delivered to those in San Jose and other communities closer to San Jose. 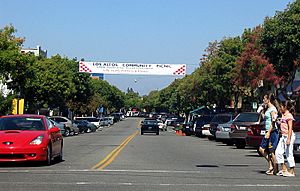 Los Altos strives to maintain a semi-rural atmosphere. Los Altos has few sidewalks except in commercial zones and along arterial roads. Minimum lot size for most residential housing is one-quarter of an acre. Most roads have broad dirt shoulders and little or no street lighting. The civic center sits in the middle of an orchard, a remnant of those that once covered the area. The downtown is a triangle with arterials on all sides that enable most through traffic to bypass Main Street. Many Los Altos homes fetch $2 million and higher, putting the city (along with neighboring Los Altos Hills, with which it shares ZIP codes) at numbers 24 and 28 on Forbes' "Most Expensive ZIP Codes in America" list in 2007.

Since the mid-1990s, downtown Los Altos has experienced mild economic difficulties due to competition from nearby shopping centers and chain stores, as well as its lack of a hotel or movie theater. Revitalizing downtown is a major issue in city politics.

Los Altos may have a legitimate claim to having the first scientifically designed sound baffle in the year 1970. Santa Clara County undertook a seminal study to calculate the effects of alternate soundwall designs along Foothill Expressway. The resulting wall brought about the predicted reduction of seven to ten decibels in noise pollution levels experienced by adjacent homes.

Located in one of Santa Clara Valley's few remaining apricot orchards, the Los Altos History Museum explores the rich history of local people and how the use of the land over time has transformed the agricultural paradise once known as the "Valley of Heart's Delight" into the technology hub that is today's Silicon Valley.

Opened in spring of 2001 adjacent to the Los Altos Library, the Los Altos History Museum occupies an 8,200-square-foot (760 m2) building – built entirely with private donations; ownership went to the town in 2002. The Museum features a changing exhibits gallery as well as the permanent exhibit, "Crown of the Peninsula".

With the mission to "collect, preserve and interpret the history of the Los Altos area," the Museum includes interactive exhibits and hands-on activities to encourage children and adults to learn about the community. Other programs include third and fourth grade tours and curricula for local school children, oral history collections, a traveling Ohlone kit, and much more.

There's more history just across the lushly landscaped courtyard in the landmark J. Gilbert Smith House. Built in 1905 and refurbished, the home nestles under majestic heritage oaks and replicates a 1930s farmhouse. Visitors are welcome to enjoy the gardens and picnic tables even when the House and Museum are closed.

A store in disarray following the 1989 Loma Prieta earthquake.

Los Altos is near the San Andreas Fault and subject to earthquakes.

The program was run by the non-profit LOS ALTOS SISTER CITIES, INC., founded in 1988. That organization later decided to cease its participation and is now dissolved. Los Altos no longer participates in the Sister Cities program.

All content from Kiddle encyclopedia articles (including the article images and facts) can be freely used under Attribution-ShareAlike license, unless stated otherwise. Cite this article:
Los Altos, California Facts for Kids. Kiddle Encyclopedia.