Sergey Mikhaylovich Brin (Russian: Сергей Михайлович Брин; born August 21, 1973) is an American business magnate, computer scientist and Internet entrepreneur. Together with Larry Page, he co-founded Google. Brin was the president of Google's parent company, Alphabet Inc., until stepping down from the role on December 3, 2019. He and Page remain at Alphabet as co-founders, controlling shareholders, board members, and employees. As of April 2021, Brin is the 7th-richest person in the world, with an estimated net worth of $100.2 billion.

Brin immigrated to the United States with his family from the Soviet Union at the age of six. He earned his bachelor's degree at the University of Maryland, College Park, following in his father's and grandfather's footsteps by studying mathematics, as well as computer science. After graduation, he enrolled in Stanford University to acquire a PhD in computer science. There he met Page, with whom he built a web search engine. The program became popular at Stanford, and they suspended their PhD studies to start up Google in Susan Wojcicki's garage in Menlo Park.

Brin was born on August 21, 1973, in Moscow in the Soviet Union, to Jewish parents, Mikhail and Eugenia Brin, both graduates of Moscow State University (MSU). His father is a retired mathematics professor at the University of Maryland, and his mother a researcher at NASA's Goddard Space Flight Center.

The Brin family lived in a three-room apartment in central Moscow, which they also shared with Sergey's paternal grandmother. In 1977, after his father returned from a mathematics conference in Warsaw, Poland, Mikhail Brin announced that it was time for the family to emigrate. They formally applied for their exit visa in September 1978, and as a result, his father was "promptly fired". For related reasons, his mother had to leave her job. For the next eight months, without any steady income, they were forced to take on temporary jobs as they waited, afraid their request would be denied as it was for many refuseniks. In May 1979, they were granted their official exit visas and were allowed to leave the country.

The Brin family lived in Vienna and Paris while Mikhail Brin secured a teaching position at the University of Maryland with help from Anatole Katok. During this time, the Brin family received support and assistance from the Hebrew Immigrant Aid Society. They arrived in the United States on October 25, 1979.

Brin attended elementary school at Paint Branch Montessori School in Adelphi, Maryland, but he received further education at home; his father, a professor in the department of mathematics at the University of Maryland, encouraged him to learn mathematics and his family helped him retain his Russian-language skills. He attended Eleanor Roosevelt High School, Greenbelt, Maryland. In September 1990, Brin enrolled in the University of Maryland, where he received his Bachelor of Science from the Department of Computer Science in 1993 with honors in computer science and mathematics at the age of 19. In 1993, he interned at Wolfram Research, the developers of Mathematica.

Brin began his graduate study in computer science at Stanford University on a graduate fellowship from the National Science Foundation. As of 2008[update], he was on leave from his PhD studies at Stanford.

During an orientation for new students at Stanford, he met Larry Page. The two men seemed to disagree on most subjects, but after spending time together they "became intellectual soul-mates and close friends." Brin's focus was on developing data mining systems while Page's was in extending "the concept of inferring the importance of a research paper from its citations in other papers". Together, they authored a paper titled "The Anatomy of a Large-Scale Hypertextual Web Search Engine".

To convert the backlink data gathered by BackRub's web crawler into a measure of importance for a given web page, Brin and Page developed the PageRank algorithm, and realized that it could be used to build a search engine far superior to those existing at the time. The new algorithm relied on a new kind of technology that analyzed the relevance of the backlinks that connected one Web page to another, and allowed the number of links and their rank, to determine the rank of the page.

Combining their ideas, they began utilizing Page's dormitory room as a machine laboratory, and extracted spare parts from inexpensive computers to create a device that they used to connect the nascent search engine with Stanford's broadband campus network.

After filling Page's room with equipment, they then converted Brin's dorm room into an office and programming center, where they tested their new search engine designs on the web. The rapid growth of their project caused Stanford's computing infrastructure to experience problems.

Page and Brin used the former's basic HTML programming skills to set up a simple search page for users, as they did not have a web page developer to create anything visually elaborate. They also began using any computer part they could find to assemble the necessary computing power to handle searches by multiple users. As their search engine grew in popularity among Stanford users, it required additional servers to process the queries. In August 1996, the initial version of Google was made available on the Stanford Web site.

By early 1997, the BackRub page described the state as follows:

The mathematical website interlinking that the PageRank algorithm facilitates, illustrated by size-percentage correlation of the circles. The algorithm was named after Page himself.

BackRub is written in Java and Python and runs on several Sun Ultras and Intel Pentiums running Linux. The primary database is kept on a Sun Ultra series II with 28GB of disk. Scott Hassan and Alan Steremberg have provided a great deal of very talented implementation help. Sergey Brin has also been very involved and deserves many thanks.

BackRub already exhibited the rudimentary functions and characteristics of a search engine: a query input was entered and it provided a list of backlinks ranked by importance. Page recalled: "We realized that we had a querying tool. It gave you a good overall ranking of pages and ordering of follow-up pages." Page said that in mid-1998 they finally realized the further potential of their project: "Pretty soon, we had 10,000 searches a day. And we figured, maybe this is really real."

Some compared Page and Brin's vision to the impact of Johannes Gutenberg, the inventor of modern printing:

In 1440, Johannes Gutenberg introduced Europe to the mechanical printing press, printing Bibles for mass consumption. The technology allowed for books and manuscripts‍—‌originally replicated by hand‍—‌to be printed at a much faster rate, thus spreading knowledge and helping to usher in the European Renaissance ... Google has done a similar job.

The comparison was also noted by the authors of The Google Story: "Not since Gutenberg ... has any new invention empowered individuals, and transformed access to information, as profoundly as Google." Also, not long after the two "cooked up their new engine for web searches, they began thinking about information that was at the time beyond the web," such as digitizing books and expanding health information.

Brin is working on other, more personal projects that reach beyond Google. For example, he and Page are trying to help solve the world's energy and climate problems at Google's philanthropic arm, Google.org, which invests in the alternative energy industry to find wider sources of renewable energy. The company acknowledges that its founders want "to solve really big problems using technology".

In October 2010, for example, they invested in a major offshore wind power development to assist the East coast power grid, which will eventually become one of about a dozen offshore wind farms that are proposed for the region. A week earlier they introduced a car that, with "artificial intelligence", can drive itself using video cameras and radar sensors. In the future, drivers of cars with similar sensors would have fewer accidents. These safer vehicles could, therefore, be built lighter and require less fuel consumption. They are trying to get companies to create innovative solutions to increasing the world's energy supply. Brin was also an early investor in Tesla.

In 2004, he and Page were named "Persons of the Week" by ABC World News Tonight. In January 2005, he was nominated to be one of the World Economic Forum's "Young Global Leaders". In June 2008, Brin invested $4.5 million in Space Adventures, the Virginia-based space tourism company. His investment will serve as a deposit for a reservation on one of Space Adventures' proposed flights in 2011. Space Adventures, the only company that sends tourists to space, has sent five of them so far.

Brin and Page jointly own a customized Boeing 767-200 and a Dornier Alpha Jet, and pay $1.3 million a year to house them and two Gulfstream V jets owned by Google executives at Moffett Federal Airfield. The aircraft have had scientific equipment installed by NASA to allow experimental data to be collected in flight.

In 2012, Brin has been involved with the Project Glass program and has demoed eyeglass prototypes. Project Glass is a research and development program by Google to develop an augmented reality head-mounted display (HMD). The intended purpose of Project Glass products would be the hands-free displaying of information currently available to most smartphone users, and allowing for interaction with the Internet via natural language voice commands.

Brin was also involved in the Google driverless car project. In September 2012, at the signing of the California Driverless Vehicle Bill, Brin predicted that within five years, robotic cars will be available to the general public. 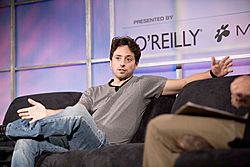 In May 2007, Brin married biotech analyst and entrepreneur Anne Wojcicki in the Bahamas. They had a son in late 2008 and a daughter in late 2011. Brin is Jewish and not religious. In June 2015, Brin and Wojcicki divorced.

Brin's mother, Eugenia, has been diagnosed with Parkinson's disease. In 2008, he decided to make a donation to the University of Maryland School of Medicine, where his mother is being treated.

Brin and Wojcicki, although divorced, still jointly run The Brin Wojcicki Foundation. They have donated extensively to The Michael J. Fox Foundation and in 2009 gave $1 million to support the Hebrew Immigrant Aid Society.

Sergey Brin is a donor to Democratic Party candidates and organizations, having donated $5,000 to Barack Obama's reelection campaign and $30,800 to the DNC.

According to CNBC, Brin became interested in blockchain technology after building a gaming computer with his son to mine ethereum.

All content from Kiddle encyclopedia articles (including the article images and facts) can be freely used under Attribution-ShareAlike license, unless stated otherwise. Cite this article:
Sergey Brin Facts for Kids. Kiddle Encyclopedia.