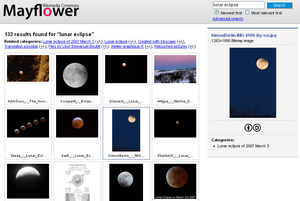 A web search engine is a type of website that helps a computer user find information on the Internet. It does this by looking through other web pages for the text the user wants to find. The software that does this is known as a search engine.

To use a search engine you must enter at least one keyword in to the search box. Usually an on-screen button must be clicked on to submit the search. The search engine looks for matches between the keyword(s) entered and its database of websites and words.

Quickly after a search is submitted the results appear on screen. This is called a search engine results page (SERP). The SERP is a list of webpages that contain matches to the keywords that were searched. The SERP usually shows web pages names, short descriptions and a link for each matching web page. The user can click on any of the links to go to one of the websites.

Search engines are some of the most advanced websites on the web. They use special computer code to sort the web pages on SERPs. The most popular or highest quality web pages will be near the top of the list.

Search engines are very useful to find information about anything quickly and easily. Using more keywords or different keywords improves the results of searches.

A search service may also include a portal with news, games, and more information besides a search engine. Yahoo! has a popular portal, and MSN Search is part of the MSN portal, while Google has a simple design on its front page. Search services usually work without charging money for finding sites, and are often supported with text or banner advertisements.

A system for locating published information scientific work was described in 1945 by Vannevar Bush, who wrote an article in The Atlantic Monthly titled "As We May Think" in which he envisioned libraries of research with connected annotations not unlike modern hyperlinks.

The first internet search engines predate the debut of the Web in December 1990: Who is user search dates back to 1982, and the Knowbot Information Service multi-network user search was first implemented in 1989. The first well documented search engine that searched content files, namely FTP files, was Archie, which debuted on 10 September 1990.

Prior to September 1993, the World Wide Web was entirely indexed by hand. There was a list of webservers edited by Tim Berners-Lee and hosted on the CERN webserver. One snapshot of the list in 1992 remains, but as more and more web servers went online the central list could no longer keep up. On the NCSA site, new servers were announced under the title "What's New!"

The first tool used for searching content (as opposed to users) on the Internet was Archie. The name stands for "archive" without the "v"., It was created by Alan Emtage computer science student at McGill University in Montreal, Quebec, Canada. The program downloaded the directory listings of all the files located on public anonymous FTP (File Transfer Protocol) sites, creating a searchable database of file names; however, Archie Search Engine did not index the contents of these sites since the amount of data was so limited it could be readily searched manually.

The rise of Gopher (created in 1991 by Mark McCahill at the University of Minnesota) led to two new search programs, Veronica and Jughead. Like Archie, they searched the file names and titles stored in Gopher index systems. Veronica (Very Easy Rodent-Oriented Net-wide Index to Computerized Archives) provided a keyword search of most Gopher menu titles in the entire Gopher listings. Jughead (Jonzy's Universal Gopher Hierarchy Excavation And Display) was a tool for obtaining menu information from specific Gopher servers. While the name of the search engine "Archie Search Engine" was not a reference to the Archie comic book series, "Veronica" and "Jughead" are characters in the series, thus referencing their predecessor.

In the summer of 1993, no search engine existed for the web, though numerous specialized catalogues were maintained by hand. Oscar Nierstrasz at the University of Geneva wrote a series of Perl scripts that periodically mirrored these pages and rewrote them into a standard format. This formed the basis for W3Catalog, the web's first primitive search engine, released on September 2, 1993.

In June 1993, Matthew Gray, then at MIT, produced what was probably the first web robot, the Perl-based World Wide Web Wanderer, and used it to generate an index called "Wandex". The purpose of the Wanderer was to measure the size of the World Wide Web, which it did until late 1995. The web's second search engine Aliweb appeared in November 1993. Aliweb did not use a web robot, but instead depended on being notified by website administrators of the existence at each site of an index file in a particular format.

JumpStation (created in December 1993 by Jonathon Fletcher) used a web robot to find web pages and to build its index, and used a web form as the interface to its query program. It was thus the first WWW resource-discovery tool to combine the three essential features of a web search engine (crawling, indexing, and searching) as described below. Because of the limited resources available on the platform it ran on, its indexing and hence searching were limited to the titles and headings found in the web pages the crawler encountered.

One of the first "all text" crawler-based search engines was WebCrawler, which came out in 1994. Unlike its predecessors, it allowed users to search for any word in any webpage, which has become the standard for all major search engines since. It was also the search engine that was widely known by the public. Also in 1994, Lycos (which started at Carnegie Mellon University) was launched and became a major commercial endeavor.

The first popular search engine on the Web was Yahoo! Search. The first product from Yahoo!, founded by Jerry Yang and David Filo in January 1994, was a Web directory called Yahoo! Directory. In 1995, a search function was added, allowing users to search Yahoo! Directory! It became one of the most popular ways for people to find web pages of interest, but its search function operated on its web directory, rather than its full-text copies of web pages.

Soon after, a number of search engines appeared and vied for popularity. These included Magellan, Excite, Infoseek, Inktomi, Northern Light, and AltaVista. Information seekers could also browse the directory instead of doing a keyword-based search.

In 1996, Robin Li developed the RankDex site-scoring algorithm for search engines results page ranking and received a US patent for the technology. It was the first search engine that used hyperlinks to measure the quality of websites it was indexing, predating the very similar algorithm patent filed by Google two years later in 1998. Larry Page referenced Li's work in some of his U.S. patents for PageRank. Li later used his Rankdex technology for the Baidu search engine, which was founded by Robin Li in China and launched in 2000.

In 1996, Netscape was looking to give a single search engine an exclusive deal as the featured search engine on Netscape's web browser. There was so much interest that instead Netscape struck deals with five of the major search engines: for $5 million a year, each search engine would be in rotation on the Netscape search engine page. The five engines were Yahoo!, Magellan, Lycos, Infoseek, and Excite.

Google adopted the idea of selling search terms in 1998, from a small search engine company named goto.com. This move had a significant effect on the SE business, which went from struggling to one of the most profitable businesses in the Internet.

Search engines were also known as some of the brightest stars in the Internet investing frenzy that occurred in the late 1990s. Several companies entered the market spectacularly, receiving record gains during their initial public offerings. Some have taken down their public search engine, and are marketing enterprise-only editions, such as Northern Light. Many search engine companies were caught up in the dot-com bubble, a speculation-driven market boom that peaked in 1990 and ended in 2000.

Around 2000, Google's search engine rose to prominence. The company achieved better results for many searches with an algorithm called PageRank, as was explained in the paper Anatomy of a Search Engine written by Sergey Brin and Larry Page, the later founders of Google. This iterative algorithm ranks web pages based on the number and PageRank of other web sites and pages that link there, on the premise that good or desirable pages are linked to more than others. Larry Page's patent for PageRank cites Robin Li's earlier RankDex patent as an influence. Google also maintained a minimalist interface to its search engine. In contrast, many of its competitors embedded a search engine in a web portal. In fact, the Google search engine became so popular that spoof engines emerged such as Mystery Seeker.

By 2000, Yahoo! was providing search services based on Inktomi's search engine. Yahoo! acquired Inktomi in 2002, and Overture (which owned AlltheWeb and AltaVista) in 2003. Yahoo! switched to Google's search engine until 2004, when it launched its own search engine based on the combined technologies of its acquisitions.

Microsoft's rebranded search engine, Bing, was launched on June 1, 2009. On July 29, 2009, Yahoo! and Microsoft finalized a deal in which Yahoo! Search would be powered by Microsoft Bing technology.

As of 2019, active search engine crawlers include those of Google, Sogou, Baidu, Bing, Gigablast, Mojeek, DuckDuckGo and Yandex.

All content from Kiddle encyclopedia articles (including the article images and facts) can be freely used under Attribution-ShareAlike license, unless stated otherwise. Cite this article:
Search engine Facts for Kids. Kiddle Encyclopedia.