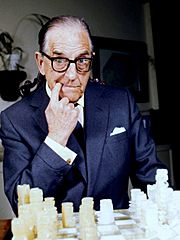 He was famous for his comic and character roles on stage and screen, especially that of Alfred P. Doolittle in My Fair Lady. He was also known for his comic monologues and songs, which he performed and recorded in his 70-year career.

Holloway was born on 1 October 1890 in Manor Park, Essex, England.

Holloway died on 30 January 1982 in Littlehampton, England from an illness, aged 91.

All content from Kiddle encyclopedia articles (including the article images and facts) can be freely used under Attribution-ShareAlike license, unless stated otherwise. Cite this article:
Stanley Holloway Facts for Kids. Kiddle Encyclopedia.