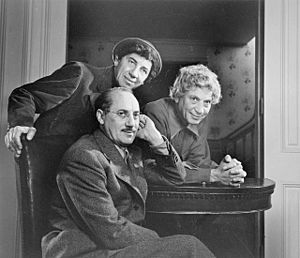 Julius Henry Marx or Groucho Marx (October 2, 1890 – August 19, 1977), was a famous American comedian. He was best known for work with his siblings in The Marx Brothers and then later on his own. He is best known for playing a fast-talking "wise guy" with bushy eyebrows, glasses, moustache, and a cigar.

All content from Kiddle encyclopedia articles (including the article images and facts) can be freely used under Attribution-ShareAlike license, unless stated otherwise. Cite this article:
Groucho Marx Facts for Kids. Kiddle Encyclopedia.