James May facts for kids 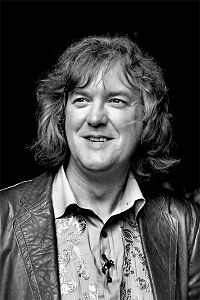 James Daniel May (born 16 January 1963) is an English television presenter and journalist. He is best known for co-hosting the BBC Two motoring series Top Gear from 2002 until 2015 with Jeremy Clarkson and Richard Hammond. He started hosting The Grand Tour in 2016, also with Clarkson and Hammond. He wrote a weekly column for the motoring section of The Daily Telegraph from 2003 to 2011.

May was born in Bristol. He has been dating dance critic Sarah Frater since 2000. The couple live in Hammersmith, London.

All content from Kiddle encyclopedia articles (including the article images and facts) can be freely used under Attribution-ShareAlike license, unless stated otherwise. Cite this article:
James May Facts for Kids. Kiddle Encyclopedia.