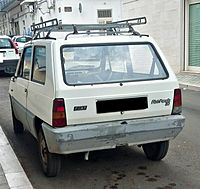 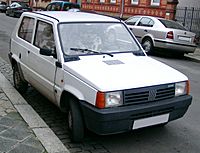 The Fiat Panda is a small car made by Fiat from 1980 until 2003. It has four seats and two doors. Normally it is bought by small families or young adults because the car is quite cheap and also the tax is not very high. The second series of the car has sold since 2003 and was the European Car Of The Year in 2004. It entered its third generation in 2011.

All content from Kiddle encyclopedia articles (including the article images and facts) can be freely used under Attribution-ShareAlike license, unless stated otherwise. Cite this article:
Fiat Panda Facts for Kids. Kiddle Encyclopedia.