Juan Manuel Fangio Déramo (24 June 1911 – 17 July 1995), nicknamed El Chueco ("the bowlegged one", also commonly translated as "bandy legged" - for his skill in bending his left leg around the ball to shoot on goal during football games) or El Maestro ("The Master"), was an Argentine racing car driver. He dominated the first decade of Formula One racing, winning the World Drivers' Championship five times.

Fangio served compulsory military service at the age of 21. In 1932 he was enlisted at the Campo de Mayo cadet school near Buenos Aires. His driving skills caught the attention of his commanding officer, who appointed Fangio as his official driver. Fangio was discharged before his 22nd birthday after taking his final physical examination.

From childhood, he abandoned his studies to pursue auto mechanics. In 1938, he debuted in Turismo Carretera, competing in a Ford V8. In 1940, he competed with Chevrolet, winning the Grand Prix International Championship and devoted his time to the Argentine Turismo Carretera becoming its champion, a title he successfully defended a year later. Fangio then competed in Europe between 1947 and 1949 where he achieved further success.

He won the World Championship of Drivers five times—a record which stood for 47 years until beaten by Michael Schumacher — with four different teams (Alfa Romeo, Ferrari, Mercedes-Benz and Maserati), a feat that has not been repeated.

He is regarded by many as one of the greatest F1 drivers of all time and holds the highest winning percentage in Formula One, winning 24 of 53 Formula One races he entered. Fangio is the only Argentine driver to have won the Argentine Grand Prix, having won it four times in his career—the most of any driver.

After retirement, Fangio presided as the honorary president of Mercedes-Benz Argentina from 1987, a year after the inauguration of his museum, until his death in 1995. In 2011, on the centenary of his birth, Fangio was remembered around the world and various activities were held in his honor. 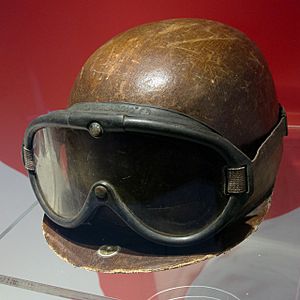 On 23 February 1958, two unmasked gunmen of Fidel Castro's 26th of July Movement entered the Hotel Lincoln in Havana and kidnapped Fangio at gunpoint. The motive was simple: By capturing the biggest name in motorsport the rebels were showing up the government and attracting worldwide publicity to their cause.

Fangio was taken to three separate houses. The captors talked about their revolutionary programme which Fangio had not wished to speak about as he did not have an interest in politics. Convinced that he was not in danger he went on to develop a case of Stockholm Syndrome, admitting afterwards that he sympathised with his captors. Fangio was released after 29 hours and he remained a good friend of his captors afterwards.

The Fangio kidnapping was dramatized in a 1999 Argentine film directed by Alberto Lecchi, Operación Fangio. 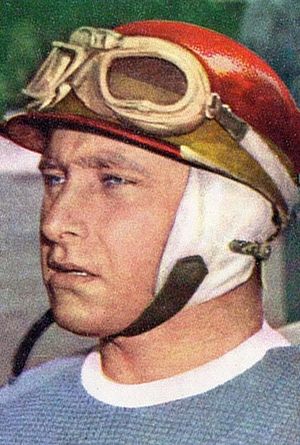 In the early 1950s, Fangio was involved in a road accident when he was forced to swerve to avoid an oncoming truck. The car, a Lancia Aurelia GT clipped a pole, spinning twice and threw Fangio out, which led him to sustain grazed elbows. One passenger stated the incident was the first time Fangio had been so terrified since the Korean War.

Fangio was never married, but was involved in a romantic relationship with Andrea Berruet with whom he had a son, they broke up with in 1960. 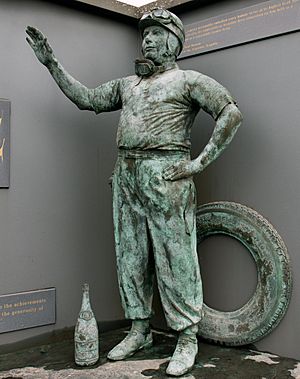 During the rest of his life after retiring from racing Fangio sold Mercedes-Benz cars, often driving his former racing cars in demonstration laps. Even before he joined the Mercedes Formula One team, in the mid-1950s, Fangio had acquired the Argentine Mercedes concession. He was appointed President of Mercedes-Benz Argentina in 1974, and its Honorary President for Life in 1987.

Fangio was the special guest of the 50th anniversary 1978 Australian Grand Prix at the Sandown Raceway in Melbourne. After awarding the Lex Davison Trophy to race winner Graham McRae, the legendary Argentinian drove his 1954 and 1955 World Championship-winning Mercedes-Benz W196 in a spirited 3 lap exhibition against 3 other cars, including the 1966 World Championship winning Brabham BT19 driven by Australia's own triple World Champion Jack Brabham.

In 1980 Konex Foundation granted him the Diamond Konex Award as the best Sportsman of the decade in Argentina.

Following his retirement, Fangio was active in assembling automotive memorabilia associated with his racing career. This led to the creation of the Museo Juan Manuel Fangio, which opened in Balcarce in 1986. 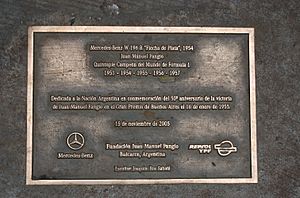 Fangio was inducted into the International Motorsports Hall of Fame in 1990.

Juan Manuel Fangio died in Buenos Aires in 1995, at the age of 84 from kidney failure and pneumonia; he was buried in his home town of Balcarce. His pallbearers were his younger brother Ruben Renato ("Toto"), Moss, compatriot racers José Froilán González and Carlos Reutemann, Jackie Stewart and the president of Mercedes-Benz Argentina at the time.

The Formula1 website states of Fangio: "Many consider him to be the greatest driver of all time."

In his home country of Argentina, Fangio is revered as one of the greatest sportsmen the nation has ever produced. Argentines often refer to him as El Maestro, el mejor, which translates into The Master, the best one.

The Museo Juan Manuel Fangio was established in Balcarce (Fangio's birthplace) in 1986. 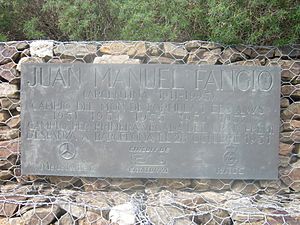 Circuit of Catalunya - Monument in honor of Juan Manuel Fangio

Maserati created a special website in 2007 to commemorate the 50th anniversary of his fifth and final world championship triumph.

A Mercedes-Benz W196R Formula 1 race car, driven by Fangio in his World Championship-qualifying Grand Prix races in 1954 and 1955 was sold for a record $30 million at an auction in England on 12 July 2013.

All content from Kiddle encyclopedia articles (including the article images and facts) can be freely used under Attribution-ShareAlike license, unless stated otherwise. Cite this article:
Juan Manuel Fangio Facts for Kids. Kiddle Encyclopedia.