The Argentine Grand Prix was Formula One Grand Prix motor race. It was held off and on from 1953 to 1998. Argentine president Juan Perón was the driving force behind the creation of the circuit, after seeing the success of the country's own Juan Manuel Fangio.

The circuit was built just outside of Buenos Aires on swampland in 1952.In 1953, the Autodrome hosted the first ever Formula One race held outside Europe. The exile of Perón in 1955 lead to an unstable government. The Argentine Grand Prix left the F1 calendar in 1961 for over a decade.

In 1972 the Argentine Grand Prix returned to the World Championship. Carlos Reutemann became the new homegrown hero. Reutemann took pole position in his world championship debut. He become only the second driver to do this. The Grand Prix remained in Argentina through 1981, but the 1982 event was canceled.

* Designed and built by 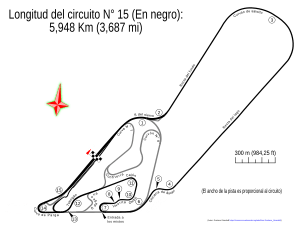 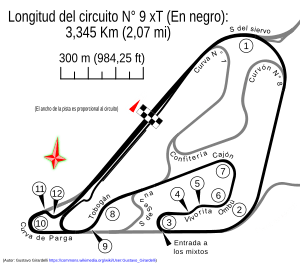 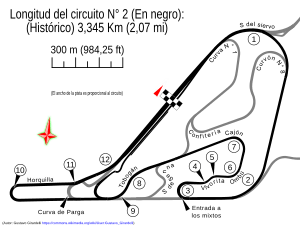 A pink background indicates an event which was not part of the Formula One World Championship.

All content from Kiddle encyclopedia articles (including the article images and facts) can be freely used under Attribution-ShareAlike license, unless stated otherwise. Cite this article:
Argentine Grand Prix Facts for Kids. Kiddle Encyclopedia.