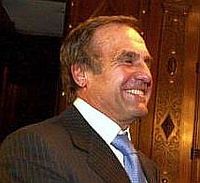 Carlos Alberto Reutemann (born Santa Fe, Argentina April 12, 1942), nicknamed "Lole", is an Argentine former racing driver (who raced in Formula One from 1972 through 1982), and later a prominent politician in his native province of Santa Fe, for the Justicialist Party.

All content from Kiddle encyclopedia articles (including the article images and facts) can be freely used under Attribution-ShareAlike license, unless stated otherwise. Cite this article:
Carlos Reutemann Facts for Kids. Kiddle Encyclopedia.