Autodromo Nazionale Monza is a motorsport race track. It is near the town of Monza, Italy, north of Milan. It is one of the oldest motor racing tracks in the world. 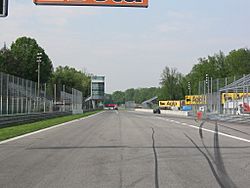 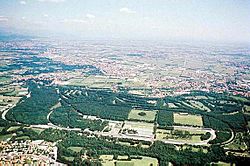 Aerial photo of the Autodoromo of Monza, with the village of Villasanta in the upper part. City of Monza is to the south, off the right side of the photo.

It was built in 1922, and has been used for the Italian Grand Prix almost every year since.

All content from Kiddle encyclopedia articles (including the article images and facts) can be freely used under Attribution-ShareAlike license, unless stated otherwise. Cite this article:
Autodromo Nazionale Monza Facts for Kids. Kiddle Encyclopedia.