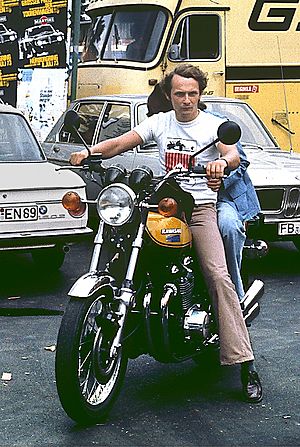 Lauda at the Nürburgring in 1973, three years before his accident.

Andreas Nikolaus "Niki" Lauda (22 February 1949 – 20 May 2019) was an Austrian Formula One driver and a three-time F1 World Drivers' Champion, winning in 1975, 1977 and 1984. He is currently the only driver to have been champion for both Ferrari and McLaren, the sport's two most successful constructors. He is considered by some as one of the greatest F1 drivers of all time. More recently an aviation entrepreneur, he founded and ran three airlines (Lauda Air, Niki, and Laudamotion). He was also a Bombardier Business Aircraft brand ambassador. He was also a consultant for Scuderia Ferrari and team manager of the Jaguar Formula One racing team for two years. He worked as a pundit for German TV during Grand Prix weekends and acted as non-executive chairman of the Mercedes AMG Petronas F1 Team. Lauda owns 10% of the team.

Having emerged as Formula One's star driver amid a 1975 title win and leading the 1976 championship battle, Lauda was seriously injured in a crash at the 1976 German Grand Prix at the Nürburgring during which his Ferrari burst into flames, and he came close to death after inhaling hot toxic fumes and suffering severe burns.

However, he survived and recovered enough to race again just six weeks later at the Italian Grand Prix. Although he narrowly lost the title to James Hunt that year, he won his second Ferrari crown the year after during his final season at the team. After a couple of years at Brabham and two years' hiatus, Lauda returned and raced four seasons for McLaren between 1982 and 1985 – during which he won the 1984 title by 0.5 points over his team colleague Alain Prost. 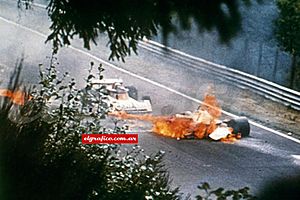 A week before the 1976 German Grand Prix at the Nürburgring, even though he was the fastest driver on that circuit at the time, Lauda urged his fellow drivers to boycott the race, largely because of the 23-kilometre (14 mi) circuit's safety arrangements, citing the organisers' lack of resources to properly manage such a huge circuit- i.e. the lack of fire marshals; fire and safety equipment and safety vehicles. Most of the other drivers voted against the boycott and the race went ahead.

On 1 August 1976 during the second lap at the very fast left kink before Bergwerk, Lauda was involved in an accident where his Ferrari swerved off the track, hit an embankment, burst into flames and made contact with Brett Lunger's Surtees-Ford car. Unlike Lunger, Lauda was trapped in the wreckage. Drivers Arturo Merzario, Lunger, Guy Edwards and Harald Ertl arrived at the scene a few moments later, but before Merzario was able to pull Lauda from his car, he suffered severe burns to his head and inhaled hot toxic gases that damaged his lungs and blood. As Lauda was wearing a modified helmet, the foam had compressed and it slid off his head after the accident, leaving his face exposed to the fire. Although Lauda was conscious and able to stand immediately after the accident, he later lapsed into a coma.

Lauda suffered extensive scarring from the burns to his head, losing most of his right ear as well as the hair on the right side of his head, his eyebrows and his eyelids. He chose to limit reconstructive surgery to replacing the eyelids and getting them to work properly. After the accident he always wore a cap to cover the scars on his head. He has arranged for sponsors to use the cap for advertising.

Lauda has two sons with first wife, Marlene Knaus (married 1976, divorced 1991): Mathias, a racing driver himself, and Lukas, who also acts as Mathias's manager. Lauda has a son, Christoph, through an extra-marital relationship. In 2008, he married Birgit Wetzinger, who is 30 years his junior and was a flight attendant for his airline. She donated a kidney to Lauda when the kidney he received in a transplant from his brother, in 1997, failed. In September 2009 Birgit gave birth to twins, a boy and a girl: Max and Mia.

On 2 August 2018 it was announced that Lauda had successfully undergone a lung transplant operation in his native Austria. 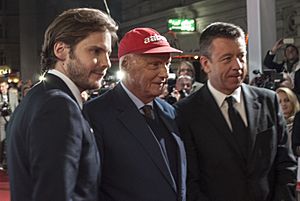 Daniel Brühl, Niki Lauda and Peter Morgan at the premiere of Rush in Vienna, Austria.

The 1976 F1 battle between Niki Lauda and James Hunt was dramatized in the 2013 film Rush, where Lauda was played by Daniel Brühl. Lauda himself made a cameo appearance at the end of the film. At this point Lauda said of Hunt's death, "When I heard he'd died age 45 of a heart attack I wasn't surprised, I was just sad." He also said that Hunt was one of the very few he liked, a smaller number of people he respected and the only person he had envied.

Lauda appears in an episode of Mayday titled "Niki Lauda: Testing the Limits" regarding the events of Lauda Air Flight 004.

All content from Kiddle encyclopedia articles (including the article images and facts) can be freely used under Attribution-ShareAlike license, unless stated otherwise. Cite this article:
Niki Lauda Facts for Kids. Kiddle Encyclopedia.