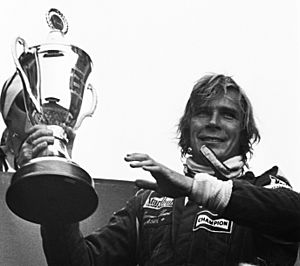 James Simon Wallis Hunt (29 August 1947 – 15 June 1993) was a British racing driver. He was best known for winning the Formula One World Championship in 1976. He later became a commentator after retiring from racing in 1979.

Hunt was born in Belmont, Surrey. He was well known for lifestyle and behaviour on and off the track. He was married to Suzy Miller and later Sarah Lomax. The couple had two children, Tom and Freddie. He was also engaged to Helen Dyson before his death. He was also a close friend of Niki Lauda.

Hunt later became a commentator. He was known for commentating on F1 races with Murray Walker. He was played by Australian actor Chris Hemsworth in the movie Rush (2013).

All content from Kiddle encyclopedia articles (including the article images and facts) can be freely used under Attribution-ShareAlike license, unless stated otherwise. Cite this article:
James Hunt Facts for Kids. Kiddle Encyclopedia.