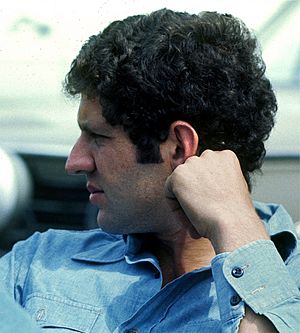 Scheckter now spends his time as a biodynamic farmer, having bought Laverstoke Park Farm, near Overton, Hampshire, west of London. As an organic farming expert, Scheckter was featured in 2005 on the Visionhealth DVD and TV documentaries, he also appeared on the Countryfile television show to make a case for organic food.

Laverstoke Park Farm was also featured on BBC's "Escape To the Country" where Jody showed viewers how Buffalo Mozzarella was made. In December 2009, Scheckter announced his intention to produce a biodynamic sparkling wine by 2012. In 2015 the farm was the setting for ITV's Sugar Free Farm where a group of celebrities had to go sugar free for two weeks whilst working on the farm.

All content from Kiddle encyclopedia articles (including the article images and facts) can be freely used under Attribution-ShareAlike license, unless stated otherwise. Cite this article:
Jody Scheckter Facts for Kids. Kiddle Encyclopedia.