The Tyrrell Racing Organisation was an auto racing team and Formula One constructor (race car maker). It was created by Ken Tyrrell. The team started racing in 1958 and started building its own cars in 1970. The team had its best success in the early 1970s. During that time, it won three drivers' championships and one constructors' championship with Jackie Stewart. The team never did as well again, but it kept winning races through the 1970s and into the early 1980s. It won its final win at Detroit in 1983. The team was bought by British American Tobacco in 1997. It finished its last season as Tyrrell in 1998.

Tyrrell Racing was created in 1958. It used Formula Three cars for Ken Tyrrell and local stars. Tyrrell stopped being a driver in 1959. He did not think that he was good enough as a driver. He began to run a Formula Junior operation. He used the woodshed owned by his family business, Tyrrell Brothers, to do the work on the cars. During the 1960s, Tyrrell moved through the lower levels of formula racing. John Surtees and Jacky Ickx raced for their first times with his team. The team's most famous partnership was with Jackie Stewart. Stewart first signed up in 1963.

Tyrrell ran the BRM Formula 2 operation during 1965, 1966 and 1967. During this time, Stewart was signed to the Formula One team. Tyrrell then signed a deal to run Formula 2 cars made by French company Matra. 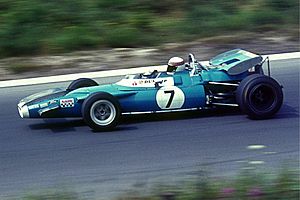 Jackie Stewart and Tyrrell won their first championship with the French Matra chassis.

With the help of Elf and Ford, Tyrrell moved to Formula One in 1968. He started as a part of Matra International. It was made up of Tyrrell's own team and the French auto maker Matra. Stewart was expected to race very well. He won several Grands Prix in the teams Matra MS10. The car's most unusual feature was the use of aviation-styled structural fuel tanks. These let the car to be around 15 kg lighter. Although it was lighter, it was still stronger than the cars it was racing against. The FIA thought that the technology was not safe. They chose to not let it be used in 1970. They said that rubber bag-tanks had to be used instead.

For the 1969 championship, the Matra team chose to not compete in Formula One. Instead of competing, Matra worked with Ken Tyrrell's 'Matra International' team. They built a new DFV powered car with structural fuel tanks, even though it would only be able to be used for a single season. Stewart won the 1969 title easily driving the new Cosworth-powered Matra MS80. Stewart's title was the first won by a French chassis. It was the only one won by a chassis built in France. It was a very special event for a team and a constructor that had only entered Formula One the year before. 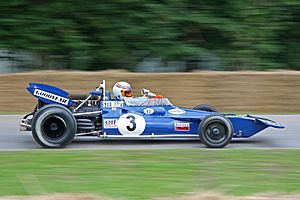 Tyrrell's first F1 car, the 001, being demonstrated at the 2008 Goodwood Festival of Speed. 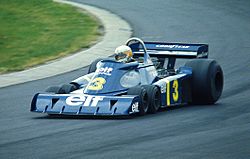 The Tyrrell P34 six-wheeler - arguably one of the most radical F1 cars ever to have raced.

IN 1970, Matra merged with Simca. For the 1970 season, Tyrrell was asked by Matra to use Simca's V12 in place of the Cosworth. Simca was a subsidiary of the American company Chrysler which was competition for Ford. Stewart tested the Matra V12. He did not think it was as good as the DFV. Ford gave Tyrrell a large part of the money they needed to race. The team also got money for the French petroleum company Elf. Elf had an agreement with Renault that did not allow them to provide money to anyone who was partnered with Simca. Because of this, Ken Tyrrell had to buy a March 701 chassis as temporary solution while making his own car in secret.

Tyrrell was still sponsored by French fuel company Elf, and Tyrrell would keep the traditional French blue racing colours for most of the rest of the time the company existed. Tyrrell and Stewart ran the March-Fords throughout 1970 with mixed success. During this time, Derek Gardner worked on the first Tyrrell built Grand Prix car at the woodshed in Ockham, Surrey.

The Tyrrell 001, which looked like the MS80, was first seen in 1970. It earned Stewart a pole position in the Canadian GP. The car had problems in all of its 3 race starts. The nearly identical Tyrrell 003 won both Drivers' and Constructors' Championships in 1971. Stewart's had health problems dealing with a stomach ulcer in 1972 and did not race. He was well in 1973 and raced again. He finishing 1st in the Championship. On October 6, 1973, Tyrrell's other driver was killed in practice for the US Grand Prix at Watkins Glen. Stewart, who was to stop racing at the end of the season, and Tyrrell decided they did not want to keep racing. Without their best driver, Tyrrell were never serious World Championship contenders again.

The team did still win some races during the 1970s with Jody Scheckter and Patrick Depailler. Most notable of these was Scheckter's win at the 1976 Swedish Grand Prix. They finished first and second in that race using an unusual Derek Gardner designed Tyrrell P34 car. The P34 was the first (and only) successful six-wheeled F1 car. They replaced front wheels with smaller wheels mounted in banks of two on either side of the car. The design was no longer used after Goodyear refused to make the small tires needed for the car. 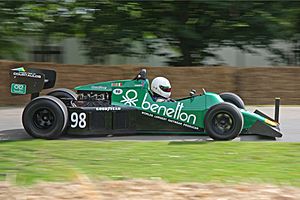 In 1977, the Turbo era started in Grand Prix racing. By the mid-1980s, normal (non-turbo) cars could not race as well. Without the enough money, Tyrrell was the last team with the Cosworth DFV. All other teams had changed to turbocharged engines. It was the start of two decades of bad times for Tyrrell. The last win for the classic Cosworth Ford DFV engine was by a Tyrrell car, Michele Alboreto at the 1983 Detroit Grand Prix. It was also Tyrrell's last Grand Prix win.

Tyrrell had money problems in the 1980s and 1990s. In the late 1990s, Tyrrell had problems with his health as well. In 1998 and in the face of dwindling form and ill health, he sold his team to British American Tobacco. The team became British American Racing. The last race for Tyrrell was the 1998 Japanese Grand Prix, where Ricardo Rosset failed to qualify and team-mate Toranosuke Takagi ended the race on lap 28 after a collision with Esteban Tuero's Minardi.

Formula One World Championship results for Tyrrell cars entered by other teams.
(key)

All content from Kiddle encyclopedia articles (including the article images and facts) can be freely used under Attribution-ShareAlike license, unless stated otherwise. Cite this article:
Tyrrell Racing Facts for Kids. Kiddle Encyclopedia.