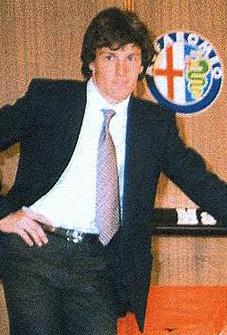 Andrea de Cesaris (31 May 1959 – 5 October 2014) was an Italian racing driver. He started 208 Formula One Grands Prix but never won, holding the record for the longest career without a race victory.

He was in many car accidents during his career. That earned him the nickname "Andrea de Crasheris". He became known for being very fast but also wild. The nickname stuck, though he went on to become a calmer, more mature driver in his later career. In 2005 and 2006 he competed in the Grand Prix Masters formula for retired F1 drivers.

All content from Kiddle encyclopedia articles (including the article images and facts) can be freely used under Attribution-ShareAlike license, unless stated otherwise. Cite this article:
Andrea de Cesaris Facts for Kids. Kiddle Encyclopedia.